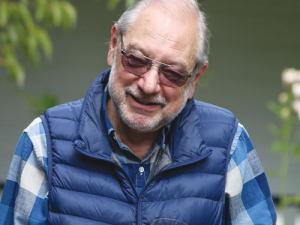 Dan Berger, the man behind the IRF’s Taste Profile.

It was Dan Berger, a 40-year veteran American wine columnist, who was a guest at the Symposium courtesy of NZWinegrowers.

He had good reason to smile, given he was the one who came up with the International Riesling Foundation (IRF) taste profile.

The idea came about during a Riesling conference held in Washington State nearly a decade ago, he said.

“One of the ideas that came out of that conference, was if we had a sweetness scale, consumers would be more comfortable about buying a bottle of Riesling, because they would not be worrying if it was sweet or dry.”

Given the wide range of taste profiles the variety can produce, Berger says consumers can become confused about what they are buying. Which in turn can be detrimental to sales.

“Each winery makes their wine slightly different. Some wineries make Riesling as a dessert wine. Some make it almost as a Chardonnay look alike. Then there are styles in between. So we decided to ask someone to create a scale that would explain where in the parameters a wine sits.”

The task fell on Berger himself, who immediately began seeking help from winemakers in the US and around the world. The first question he required an answer for was just what criteria needed to be considered in any guideline. Number one was eventually agreed on – acidity.

“But number two, very close behind it was pH.”

However once Berger began writing the technical guidelines, it became apparent that there were other factors that needed to be considered as well. Alcohol levels were one, while another was the use of oak barrels.

Eventually after careful consideration, both were dismissed as not being as relevant on the dry to sweet scale as sugar, pH and total acidity.

The Riesling Taste Profile was created.

The next question facing the proponents, was whether or not to make it a mandatory element for members of the IRF.

“We decided that was not appropriate. Some marketing plans do not call for this, while others would love to use it. So we decided it was optional, for whoever wanted to use it.”

The scale allows producers to place an arrow above the scale it believes best suits their wine, somewhere between dry and sweet.

“They are not limited by the suggestions or formula we came up with. The formula is there as a guideline only.”

Since its inception, it has been used on a hundred million bottles around the world. Wineries from Germany to Argentina and also New Zealand have adopted it, in an effort to clarify the wine for consumers. And Berger says it has increased sales for those that have taken it on board.

“Riesling has become a much easier wine to sell when it has the sweetness scale on the back label. My belief is very simple. In most people’s eyes, Riesling is sweet. We all know that is not true. Riesling can be made very dry, and usually when it is it is a perfect match for certain types of food. But the consumer is left to their own devices to figure it out and that becomes very confusing. The more information consumers have, the more choice they have. If a wine is completely dry and it says so on the back label, you may not want to buy it. But it would be nice to know that before you buy it, wouldn’t it?”

The Riesling Taste Profile is available for anyone to use and guidelines and the graph itself can be found on the IRF’s website, www.drinkriesling.com.

What’s more, it doesn’t limit itself to the one varietal. Berger says the scale has proved so worthwhile that it has been adopted by wineries producing Chenin Blanc, Pinot Gris, and Gewurztraminer.

“It is the same scale, same formula, the whole thing. It is now being adopted for many other grape varieties, even people who are not members of the IRF.”

It is also free of charge to all winemakers.

“If they want to use the scale on the back label of an Albarino, they can go ahead and use it. We are just thrilled the consumer is now being empowered to make a purchasing decision.”