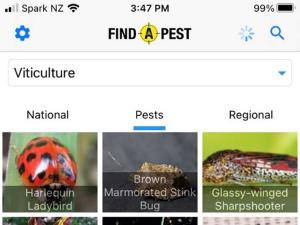 Ever found an unusual insect out in the vineyard and not known what it was, or what to do?

There’s now an app to help with that. The free Find-a-pest app for iPhone and Android enables users to take photos of any suspicious insects, plants, or plant disease symptoms and submit them through the app for quick identification.

When a new pest or disease arrives in New Zealand, the sooner it is detected and reported, the better chance we have of being able to eradicate it before it becomes established and difficult to manage. The Find-a-pest app means anyone with a smartphone can be on the lookout, and quickly and easily report anything suspicious, or anything they don’t recognise. New Zealand Winegrowers (NZW) encourages anyone working in vineyards to download the app and give it a go – next time you spot an insect you don’t recognise, use Find-a-pest to take a photo and submit it for identification.

The app is designed as a general surveillance tool and has been developed by Scion and the Ministry for Primary Industries in conjunction with primary sector organisations concerned with biosecurity, such as NZW. It contains a series of fact sheets relevant to various primary sectors with information about both unwanted pests and diseases not known to be present in New Zealand, and a range of pests and diseases already established here. When a user submits an image through Find-a-pest, it is triaged by an industry representative. Images of low-risk species such as existing pests or weeds are then sent on to iNaturalist NZ (a web-based citizen science platform) for full identification.

If the image shows a suspected biosecurity threat, it is then forwarded to the Biosecurity New Zealand exotic pest and disease hotline for follow-up; the user will receive instructions as to next steps and the image is not released publicly on iNaturalist. GPS location information along with the time and date is also included with the image, as well as any other details the user wishes to add. Exact location can be obscured from public view by the user through the app’s settings. Photos can also be taken and stored in the app offline, to make it more user-friendly for those working in the field in remote locations. The photos will then be automatically uploaded when the phone next gets a wifi or data connection.

Find-a-pest is intended to aid in quick and accurate identification of pests for primary industry groups and is a great tool to help protect the New Zealand wine industry from unwanted pests and diseases. Biosecurity is everyone’s responsibility; downloading and using Find-a-pest in the vineyard and beyond is an easy way to contribute to our biosecurity team of 5 million.