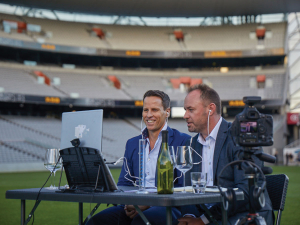 The 50,000-seat Auckland venue was opened exclusively for Tim and Rob, who were situated on the halfway line and looking up at the Irish television host on the big screen. Graham Norton commented that he kept expecting someone with a lawn mower to appear in the background.

Tim and Rob had couriered seven Sauvignon Blanc samples to Graham in Cork, along with a winemaking kit filled with beakers, which Graham set up at home, while Tim and Rob arranged their winemaking kit on the pitch at Eden Park.

The three business partners are set to produce their 15 millionth bottle of wine this vintage; a landmark moment since their first run of 14,000 bottles of Marlborough Sauvignon Blanc in 2014. Tim says that it was a pretty special moment. "Running down the tunnel onto the pitch was fantastic... We even had the home team changing room to get ready in. It really felt like game day."

Historic winery back in use

New Zealand winemaker Invivo is about to move into a historic 114-year- old winery at Te Kauwhata, after securing a long term lease and full control of the winery.