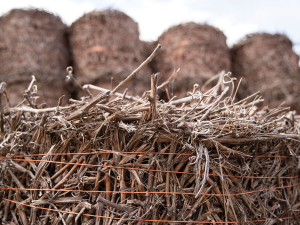 Putting a vineyard stream back on course is just one of the ways Yealands is mitigating its environmental impacts, says its General Manager of Sustainability Michael Wentworth.

"I believe that Yealands Wine Group is a model of innovation in sustainable wine production," he says. "By 'thinking boldly and treading lightly' we established a culture of experimentation long before it was 'cool to be green'."

Yealands won two gold trophies at The Green World Awards 2022 in Dubai, including in the Carbon Reduction category, for a strategy geared towards being 'carbon positive' by 2050, with  a 50% reduction by 2030. The company has achieved a 34% drop in emission intensity since 2012, having been certified Toitū carbonzero since its establishment in 2018.

Innovations have included grazing babydoll sheep in the vineyard year-round to replace mowers, a winery covered in solar panels, and the burning of vine prunings in place of LPG, providing heat to the winery. Having recognised "the very real threat" to the wine industry's livelihood, the strategy has evolved in recent times to target emission elimination rather than reduction, says Michael. They have also increased the scope of influence, "moving beyond our vineyard boundary and into the global community", says Michael, referring to Yealands joining the International Wineries for Climate Action (IWCA) in 2020, to share, learn and benchmark Yealands against the world's best.

The second gold was in the Regeneration category, for Yealands' Station Creek Regeneration programme. Station Creek is the main tributary running through the centre of the estate vineyard in the Awatere Valley and was moved during initial development to optimise planting land. Returning it to its original path has involved removing vines, establishing the primary channel, regrassing and planting native trees, with expectations of more than 20,000 natives planted over 17 hectares by 2023, many of them propagated on site. Once complete, the focus will move to erosion prone hillsides, coastal and sensitive habitat protection and wetland restoration.

Michael says the project is down to a "genuine desire to return the water course back to its original state and improve water quality", but also because they learned over time that "native reverts to its natural state". By reinstating the original course and reintroducing native flora and fauna, they have much more "resilient and healthy vineyard", he adds.

Michael is speaking about IWCA at the Tackling Climate Change webinar series in June.