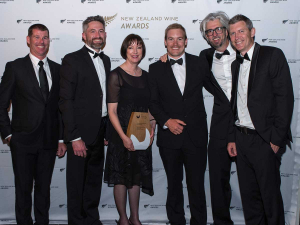 The smiles say it all. The winning Villa Maria team with their cache of trophies.

And Syrah was the big winner when it came to varieties, with one wine taking out Champion Wine of the Show, while three others were awarded the Wine of Provenance trophy.

Chair of Judges Warren Gibson described the winning wine as; “Immediately appealing and seductive on the nose. Delicious and savoury on the palate. Exceptionally well crafted.”

Central Otago winery Peregrine scooped up both Organic trophies on offer. The Champion Organic Red Wine 2019 was awarded to their 2017 Pinot Noir, while the Champion Organic White Wine 2019 trophy went to their 2018 Riesling. The awards, given back to back, meant Peregrine CEO Fraser McLachlan had to come up with a second speech, after thanking everyone involved in the creation of the Pinot Noir. He didn’t get much time to reflect on having won the two trophies, before he was called back to the stage, when Peregrine were awarded the Champion Open Red Wine trophy for their 2018 Saddleback Pinot Noir.

“These results reflect the enormous amount of passion and effort our team pour into our wines, from ground level right through into the marketplace, and we are delighted to have been recognised by the industry,” McLachlan said.

There were also smiles all round for family owned Seifried Wines of Nelson, who took out the Champion Open Wine Trophy with their 2019 Sauvignon Blanc. Their renowned wine first won accolades earlier this year when it was awarded the Champion Sauvignon Blanc trophy in the New Zealand Wine of the YearTM.

The present relates to the winners to this year’s Young Viticulturist, and also now the Young Horticulturist – Simon Gourley, and Young Winemaker – Emily Gaspard-Clark.

The future was acknowledging the top student from the New Zealand Winegrowers School of Wine. That honour went to Kris Godsall.

The New Zealand Wine Awards is the new look event, taking over from what had been a dinner to celebrate winning wines. Part of the PwC Strategic Review suggestions was to amalgamate the Wine of the YearTM with the annual dinner, to celebrate everything about the New Zealand Wine industry. More than 600 people attended the event, held for just the second time in Blenheim.