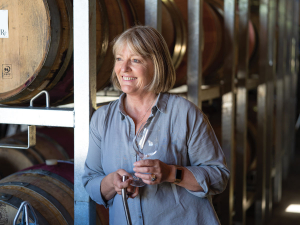 General Manager for the Hawke's Bay A&P Society, Sally Jackson, says the primary sector is the "cornerstone" of the region's economy, "and the event aims to identify, promote, and celebrate excellence in winemaking in the region as well as endorsing the contribution viticulture has to the economic, cultural, and social wellbeing of Hawke's Bay".

Chief Judge Ant Mackenzie says the quality of wine over the past four years has increased year on year.

"A highlight for this year's judging panel was seeing the smaller and more diverse wineries receiving medals. Over 75 percent of all entries submitted this year were awarded a medal and this was a direct result of a perfect season climatically, with crops across Hawke's Bay being grown with a strong concentration of flavours."

The winner of the Hawke's Bay Winegrowers Hall of Fame for 2021 was Kate Radburned, recognised for her leadership, mentoring, advocacy and ability to empower others in the wine industry across New Zealand.

Church Road Chief Winemaker Chris Scott has been named New Zealand Winemaker of the Year at the 2021 Winestate Wine of the Year Awards, having already taken the title in 2013, 2016 and 2020.