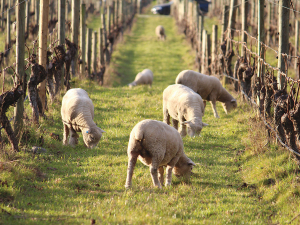 Research is being conducted on the effects, benefits and implications of integrating sheep in vineyards.

With 27 million sheep in New Zealand it is not surprising that a number will end up in amongst the country’s 37,000 hectares of grapes.

These days it is taken as normal practice, one that has grown considerably over the past decade.

But while we may take that for granted, other wine producing nations are not quite as quick to follow suit. In fact, according to researcher Meredith Niles from University of Vermont, New Zealand is unique.

“Recent estimates suggest that 59 percent of vineyards are integrating sheep in some way,” she says. “This is really significant, because it is literally not happening at that level anywhere else in the world. For example, there are only three vineyards in the entire state of California that are integrating sheep into their vineyards. What you are doing is quite unique, it is very innovative and it is at the forefront of what is possible in other regions.”

Niles has been studying the effects, benefits and implications of integrating sheep for the past three years.

She was motivated after finding that no research had been undertaken on the environmental or economic benefits, or how widely the practice had been adopted.

Her scientific paper (released in late 2017) is a result of in-depth interviews with 15 Marlborough growers, who collectively represented 8 percent of the Marlborough plantings and 5 percent of New Zealand’s.

There was an even divide among the growers utilising their own sheep and those who were bringing sheep in. The cost for the sheep (when it was charged) was between 25 and 45 cents per sheep, per week. Every grower had sheep among the vines over the winter months, while 13 percent used sheep for leaf plucking and one grower had sheep among the vines from later January through until veraison.

When it came down to quantifying benefits, the growers were unanimous about the positive impact sheep had on the grass levels in the vineyard.

Other benefits listed by growers included frost protection – with the sheep keeping the grass levels low in times of potential spring frosts. Having sheep required less nitrogen to be used in the vineyards according to some growers, while others mentioned the drop in fuel usage and the marketing potential of integration.

“We quantified some of the cost savings and asked the growers how much money do you anticipate you have saved,” Niles said. “On average across all farms, the growers mowed 2.2 fewer times annually.”

That resulted in an average savings of US$10,394 per farm through fuel and labor costs (at current exchange rates that is NZ$15,595).

In terms of herbicide usage, farmers mentioned to Niles that sheep were particularly good at targeting deep-rooted and woody weeds like mallow that often even herbicides would not be able to kill.

Overall, having sheep in the vineyard created savings according to the scientific paper, on average for farmers using both practices of US$12,405 or NZ$18,610 annually – a substantial amount.

There were challenges Niles noted, as growers said there is the potential for sheep to damage wires and vines, especially if they get spooked. There was also the chance the sheep would nibble on irrigation lines and drippers, but some growers had found burying the irrigation lines mitigated that issue. There was also the need to consider chemical withholding periods for the sheep who have been in vineyards. Overall though, growers indicated that the benefits outweighed any potential costs.

Niles’ research is on-going as she now wants to study further economic and environmental benefits of integration “Not just the mowing and herbicide benefits, but really getting into more detail. What does it mean for the ecosystem if the industry is putting on collectively much less herbicide? What is it doing for bio-diversity? What are the potential labour costs and savings of these systems.”
She is also keen to take the research to other regions especially those with red varieties, to determine if using sheep for leaf plucking is a viable option.

Niles is keen to hear from growers who have or have not integrated sheep, and about other issues that could be included in future research. You can contact her at; This email address is being protected from spambots. You need JavaScript enabled to view it.