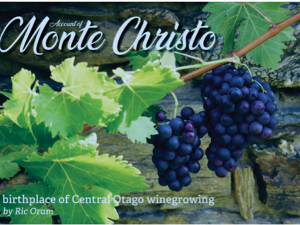 Ric Oram has written his fourth book about the history, people and places of Central Otago vineyards, called Account of Monte Christo.

It tells the story of French immigrant Jean Desire Féraud, who helped pioneer viticulture in the region in 1864, along with his neighbours, and fellow Frenchmen, the Bladier brothers.

The brothers left town the next year, but Jean continued to develop his Monte Christo orchard and vineyard near Clyde, going on to make cordials, bitters and wines. All that remains of his work is his "manufactory", now the oldest winery in New Zealand, says Ric.

The winery is about to be restored into a tasting room for the new iteration of Monte Christo Winery, owned by Dunedin-born Stanley Paris, with work to begin in July.

The new initiative includes a 40-metre long underground cellar and a new winery to be developed next year on the neighbouring Monte Christo Berry Farm.

Bragato Research Institute recently confirmed that Feraud's legacy lives on beyond the building, with a descendant of his vines located at the winery and identified through molecular testing as Trollinger, or Black Hamburg.

Account of Monte Christo is published by Ric Oram; This email address is being protected from spambots. You need JavaScript enabled to view it.