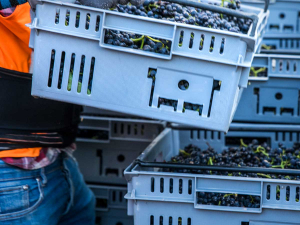 Grape yields across the country have taken a hit from poor flowering, but growers and winemakers are welcoming beautiful fruit and a kind ripening season.

Nautilus Estate Winemaker and General Manager Clive Jones said on 18 March that vintage '21 in Marlborough was progressing well. "The fruit is pristine in quality but down across the board in quantity - particularly for Pinot Noir and Pinot Gris," he said.

"At the halfway stage through the Sauvignon harvest, crops are moderate but flavours are fantastic.

Clive said the weather had been close to perfect, "with barely a glance required at the weather forecast", and Nautilus was on track to have completed picking before the end of March, "our earliest finish ever".

Jules Taylor, Gourmet Traveller Wine's 2021 New Zealand Winemaker of the Year says all varieties are lower than the long-term average and agrees Pinot Noir and Pinot Gris are particularly light, "which is a shame", but is also the reality of horticulture.

The silver lining is that fruit is beautiful and clean, thanks to a great summer.

"The weather is playing the game and the mood is so different to last year, with Covid," she says. "It's back to the old days, with all the banter in the field."

Jules says the 2020 harvest was a case of keeping the panic at bay and getting the fruit off as fast as possible, "in case Covid decided to rear its ugly head".

The contrast with 2021 is extreme. "This year we can pick exactly when we want to, in terms of capturing the essence of Marlborough at its best - it's a delight."

In Central Otago, Viticulturist James Dicey says yields are variable, with some subregions doing "really well", while others are "exceptionally" low, with expectations of as little as two tonnes to the hectare predicted for some blocks.

That's due to a cold initiation period that resulted in smaller bunches, and unsettled weather during flowering, causing some hen and chicken and poorly set bunches.

He says the weather averages for the season look typical, but have resulted from big blocks of extreme conditions. "We have been seeing quite big swings in weather variability, which has stressed the grapevines and stressed out the viticulturists.

However, he has been pleased by a "really nice" and consistent ripening period and "coolish" nights, and says the positive of the small yields is the "really high quality fruit" and lack of disease pressure.

That gives growers "the luxury of time with picking decisions", and the option of leaving fruit out for longer, if required. And that could be key to getting fruit in this harvest, with labout at "dire" levels due to border closures, he says.

James has spent more time and money than ever before advertising harvest roles, including to viticulture and oenology students, in backpacker lodges and on all bulletin boards, and directed to the remaining hospitality staff in the area.

The main pressure is on staff for hand picking, with little of the area suitable for machine harvesting.

James says some blocks that have never been machine picked before now have that option as a back-up plan, but in many cases a hand pick is the only option, because of a steep aspect or small size. Two of the blocks he works with, for example, are 0.3 hectares, "so it's not economical to have a machine turn up".

James says staff are "trickling" in, "but if we don't get what we want or quite what we need, then harvest will be delayed or protracted... we are encouraging wineries to pick early and pick hard".

In Hawke's Bay, Esk Valley Winemaker Gordon Russell says they have experienced lower yields, with a general drop of around 20 percent, due largely to poor flowering.

He says Sauvignon Blanc yields have done better than Chardonnay and the reds, which have small berries and loose bunches. The low yields and lack of rain means there has been no disease pressure, and cooling conditions are creating an enviable ripening period, allowing acids to drop without sugars climbing too high. "There seems no hurry at the moment."

Esk Valley picked white varieties up to 19 March, and Gordon says the harvest to date has delivered grapes of excellent quality.

He expects wine to be "bright, fresh and pure".

The labour situation has been manageable in Hawke's Bay, with viticulture sharing picking gangs with other horticulture industries, he says. "We seem to have been able to get in what we wanted when we wanted it, so it hasn't been an issue."

However, that's also down to a strategic approach, which has seen hand picking tonnages drop slightly, allowing selective machine harvesting to ease some labour pressure."

At Matawhero, Owner Kristen Searle says tonnages are about average for a Gisborne season "and with great ripening weather it will be a great vintage for Gisborne wines".

Kirsten says apart from some frost damage at budburst in some vineyards, the season generally has been good and has produced "some exceptional fruit".

Matawhero began picking on 22 February, which is their earliest start ever.

"The season saw higher growing degree days and heat summation during the season which would have ensured the early pick. We also experienced low disease pressure and good brix, acid and Ph balance at harvest."