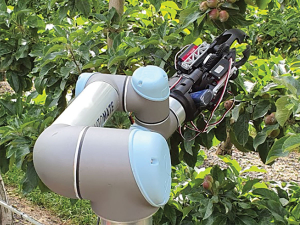 A $17 million robotics project will trial human assist prototypes in New Zealand vineyards this winter, as well as a virtual reality system to train pruners.

The MaaraTech Human Assist Project’s augmented reality (AR) pruning technology is nearing completion, promising the opportunity to look through a lens and be guided in pruning decisions by artificial intelligence (AI) trained in ideal pruning metrics. The technology, which will show an inexperienced worker what to cut and where, is likely to be trialled in vineyards later this year, says Professor Bruce MacDonald of Auckland University.

Meanwhile, an initial prototype has been developed for a robot platform to travel down vineyard rows, collecting data through photos that can help build a 3D model of grapevines. That information will be key to training the AI, but once fully developed, the autonomous vehicle, which arches over the vines, will also carry robotic arms, so it can reach across and do the pruning and thinning itself. Bruce hopes the autonomous platform will also be ready for field trials in 2021. “It probably won’t be very good at making decisions about pruning”, he explains, but the trials will be an important step in refining the design.

Meanwhile, one of the technologies drawing the most attention from growers and wine companies - and closest to commercial viability - is a virtual reality (VR) system that trainees can use to learn, and be tested on, pruning decisions, says Bruce. “When we showed the AR idea to growers, they said they wanted to use it for training people before they step into the vineyard and start working… We saw we could take the AR system and use a VR environment.”

The MaaraTech team already has a first prototype for the VR system, and is looking for a commercial partner “to get it into the industry because they want it quite quickly”, says Bruce.

MaaraTech Human Assist began in 2018, after the Ministry of Business, Innovation and Employment’s Endeavour Fund granted $16.8m for a five-year transdisciplinary project to research and develop robots and AI technologies for use in horticulture and viticulture in New Zealand. The project is led by the University of Auckland, in collaboration with University of Canterbury, Lincoln Agritech, Plant & Food Research, University of Waikato and University of Otago.

Each partner is working on a different aspect of developing the technologies, including building the autonomous platform, creating the software, integrating image data to create 3D models of the plants and gathering metrics on how growers decide to prune. The AI can then be trained in the structure of the grapevines, geometry of the cane, and the “rules” growers use for pruning, says Bruce. Meanwhile, the University of Otago’s expertise is being used to analyse the social aspects of the technology, “and how it will be accepted by people, workers and communities”, he adds.

“Having a team with expertise in all the areas you need is really important... Our concept is that this kind of technology can be used in horticulture for all kinds of tasks, not just pruning and thinning… Those will be next steps after we see these working really well.”