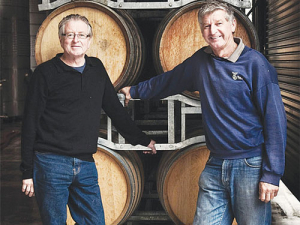 James Healy (left) and Ivan Sutherland are two of the steering committee of 100% Pure Marlborough.

A group of producers in Marlborough believe the time has come for the region to adopt a 100% Pure strategy to protect the region’s reputation and preserve the integrity and value of the Marlborough wine industry.

Ivan Sutherland from Dog Point Wines is one of six winemakers on the steering committee that aims to see an Incorporated Society promoting wines that fit the 100% Pure Marlborough ethos.

It is not a new idea, given the first murmurings emerged back in 2011. Sutherland says they were on the back of an increase in bulk wine leaving Marlborough, destined for export markets. While initially the idea was shelved, it has recently come to the fore again.

“The bulk wine leaving Marlborough is about 39 percent and we feel very strongly that it is time to do something about it,” he says.

“It is about protecting the authenticity of Marlborough wine. To have credibility the initiative will need to have some teeth and it is intended to establish appropriate ethics and standards.”

That means anyone who is a member of 100% Pure Marlborough (not the finalised name at this stage) has to adhere to certain standards and rules. They include; all fruit being 100 percent grown in Marlborough, wine bottled in New Zealand and most importantly of all, conforming to certain yield caps that will be within reasonable limits.

“We need to take into consideration the price point where the wine is being sold and the sub regions where the fruit comes from,” Sutherland says. “We may look at kilos per vine as a measure, but we still have a bit of consultation and research to do on that.”

He also says that while some may argue they can make great wine with high tonnages, it is a hard statement to sell in the wider international market place.

“I defy anyone to convince us that they can persuade the majority of consumers along with media and trade that a crop of 18 plus tonnes per hectare is going to make quality wine. It isn’t going to happen.

“There may be extenuating circumstances where a company is consistently producing a good wine from a high yield, so we will have the ability to subject those wines to a tasting panel. These are some of the nuts and bolts we need to work through.”

The steering committee is made up of winemakers from some of the most respected companies based in Marlborough. They include; John Forrest – Forrest Wines, Tim Heath – Cloudy Bay, Ivan Sutherland and James Healy – Dog Point, John Buchanan – Mt Riley and Clive Jones – Nautilus Estate.

But Sutherland is quick to add, this is not some exclusive little group.

“It is all about being inclusive, not exclusive. This is not a club for small boutique producers.

“So far we have had a very encouraging response with 40 companies saying they are keen to be involved.”

Currently the steering committee is looking to form an Incorporated Society, and plan to have it operational prior to the release of the 2017 vintage.

“We are not the only organisation that is working along these lines. Central Otago has a similar thing, as do Gimblett Gravels and Waiheke Island. We are not alone in our thinking.”

Sutherland says the amount of bulk wine going overseas that may be mixed with 15 percent of other fruit, can only diminish the reputation of Marlborough.

“There have reportedly been people who have been buying fruit from growers from this recent vintage at around $600 a tonne, that had already been refused by companies.

We are asking, where is this going? What is it going to be mixed with? There is a proliferation of labels out there and you only have to look at some of the addresses on the labels – it may be a street somewhere in Sydney or London. How does that affect the Marlborough name?”

In terms of adherence to the standards and rules Sutherland says the articles of the association would mean producers have to allow an independent audit – “members need to be able to say, I can show you what makes up this wine.”

A Marlborough winery is attempting to replace sulphur dioxide (SO2) from their organic Sauvignon Blanc and replace it with green tea.

The wine industry was never Stuart Dudley’s first career choice. The viticulturist for Villa Maria Wines in Marlborough had his mindset on research or forensics, having completed a degree in Genetics and Biochemistry.