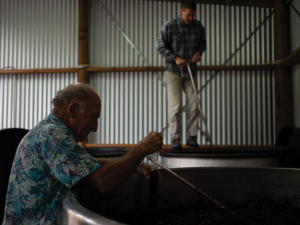 The idea was seeded after a visit in the late 1990s to Forrest Estate in Marlborough, owned by John’s former lab student Dr John Forrest. As the couple drove home to Dunedin, the concept of a family vineyard continued swirling in their minds. However, as busy scientists at the University of Otago, with collaborations all over the world, dreams of a vineyard were relegated to the backburner, until arrival of an email in 2000 advertising land on the river flats near Tarras.

John and Marilyn took a punt, bought the block, then continued their day jobs. John describes it as a wonderful piece of land: ringed by the Southern Alps and carved by glaciers, Māori Point rises from the banks of the Mata-Au (Clutha River), and is named for the Māori prospectors who panned for gold there in the 1860s.

In 2002 they found the time and head space to plant their vineyard. At first they thought they might carry on with their science roles, but quickly discovered that running two research labs and two teaching careers was not compatible with building a vineyard. In 2007 John swapped his lab coat and microscope for pruning tools and a tractor. It took Marilyn several more years to extricate herself from the university.

John says the repetitiveness of working on the land was something both had to get accustomed to, but their scientific backgrounds came to the fore when they started making their own wine in 2013. “Farming is a different mindset – based on experience and tradition and we had to get our heads around that. But in the winemaking, we had skills that were useful. I also have a very well-equipped lab for the size of our vineyard,” says John with a smile.

He now uses his talents with a microscope to look at natural wild yeasts rather than embryonic muscles. “We were over worried about how difficult the winemaking would be, but once we started we couldn’t believe we hadn’t done it earlier.”

They count themselves lucky to have Matt Evans at their side since 2011, an experienced winemaker who is now a 50 percent shareholder in Māori Point.

John and Marilyn have taken a very hands-off approach with their winemaking – letting the environment and grapes play to their strengths.

John says in Central Otago they don’t talk about a regional terroir, but more a difference of altitude. “There were three major glacial periods, the high levels are the oldest, then the middle levels and then the young soils are at the bottom, where we are as part of the Valley Bottom Cohort. Land at the end of the glacier, where all the rubble resided, is described as sterile media - fairly nutrient free, lacking in trace elements, free-draining soils, which responds terrifically well to being irrigated - just perfect for Pinot Noir,” he says. “The grapes struggle, and therefore produce beautiful intense flavours. It’s just an accident of nature... There’s nothing special we are doing, just the right grape in the right place.”

New Zealand has many wild native yeasts, says John. “It’s a mystery where they originated from, but we rely upon them. This natural fermentation style is more common amongst vineyards our size.”

Each vineyard has its own yeast population which is distinct to itself, he adds. “There’s a circular nature, having the yeasts in the fermentation tanks, then the skins go onto the compost, and the fruit flies then redistribute the natural yeasts out to the vineyard again.”

John has also been obsessed about becoming chemical free, and has managed to do that this year. “We’ve never used insecticides, have never had to, but weeds have been a problem. We’ve finally found an undervine mowing machine that actually works, a new Berti machine. So we are incredibly happy about that turn of events.”

This year, there is no better place for a Pinot Noir grape than Central Otago, says Dr John Harris of Māori Point, describing the “best vintage we’ve ever had”. He calls it “an extraordinary contrast” to vintage 2020, when bad weather during flowering resulted in very poor fruit set. “You couldn’t imagine two such different crops,” he says. “An early warm spring in 2020 saw the vines flowering two weeks early, followed by a cold and wet January, then a steady, warm late summer. For some reason everything came together perfectly. When we went to do the colour thin in mid-February the fruit had ripened very evenly, without a lot of fruit thinning required.” John says the vines produced generous crops, and they harvested early in perfect weather. “In fact, the grapes were ripening at a pace that we had to work hard to keep up with them. No botrytis, no mildew, no disease and very few bird issues. Normally we are inundated with wax-eyes swooping into the fruit bunches, and then the native falcons gather to eat the wax-eyes, but that didn’t happen this year.”

The result was a harvest of dark skinned grapes and what will be very flavoursome wine, he says. The Māori Point Pinot Noir has now finished fermenting and has been pressed, with initial tastings revealing an “amazingly intense, rich, very fruity, very full on Central Otago style”. Māori Point’s two different Pinot Noir Rosés display flavours like nothing John has ever experienced. “Such intensity - off the scale.”