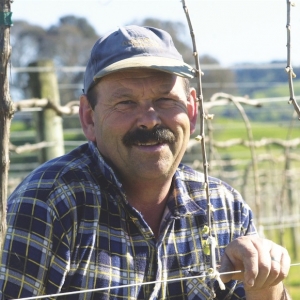 Over the next few months, NZ Winegrower is profiling the people you elected to the Board of NZW. Next up Deputy Chair John Clarke.

What Is Your Background In The Wine Industry?
I have been growing grapes in Gisborne for the past 35 years supplying a number of companies many of whom have been the subject of merger and acquisition over that time. We first planted Muller Thurgau grapes but nowadays our predominant variety is Chardonnay mainly for sparkling wine but also supplied to a winery as a varietal.

When Did You First Become A NZW Board Member?
I became an alternate eight years ago and a full board member seven years ago.

What Inspired You To Stand For The NZW Board?
I was Chairman of Gisborne Winegrowers for 10 years until 2012 and elected to the NZGGC representing the Gisborne region during that time. I was asked to put my name forward as President of the NZGGC in 2012 on the retirement of the previous chair and as they say the rest is history. I guess any inspiration or desire comes from wanting to be part of a dynamic and growing industry and one that in the 90's because of other commitments I was unable to become involved in.

What Committees Are You Involved With And Why Those?
I am NZW Deputy Chair and a member of the Finance Committee. I Chair the Advocacy Committee. This committee deals with a basket of issues that can impact on the ability of the industry to operate nationally and internationally.
I also Chair the Project Governance Group of the Lifestyle Wines Project representing NZW. This seven year project is well through its first full year and its size and scope and its potential to add significant first mover advantage and value to the industry is huge.

As A Representative Of Your Region – What Are The Major Concerns Of Those Members?
I don't represent a region. Given that I am elected "at large" I see this as being the vehicle for election rather than a platform around the Board table. I strongly believe that I need to be available to any member (winery or grower) and to have the ability to consider their issue or concern in the context of the wider New Zealand wine industry.
The bottom line is we are all "Winegrowers".

What Do You Believe Is The Greatest Hurdle Moving Forward For NZ Wine?
Unity. There is huge diversity within the industry in terms of current business models. Some have emerged in recent years as a result of supply/demand issues others are the traditional grower/winery model and the range in size and scale is huge. Such is the dynamic of a growing industry and the challenge for NZW is not to pick winners but rather ensure that the reputation the industry is built on of premium quality product is understood and adhered to by all players.

What Issue Do You Believe Needs A Higher Priority Than It Is Currently Receiving – And Why?
There is no one issue that requires a higher priority rather a range of issues that are all treated as "priority". The frustration for NZW like many producer bodies is that many of our issues require action by Government and whilst we may see them as needing to be done yesterday we often lose sight of the fact that they need to be viewed in the context of a whole of Government response. That said we have a strong relationship with Government ministers and officials and the "wins" do come.
However on occasion there will be members whose priorities will be different to ours and that needs to be managed.

What Would You Say Is The Greatest Achievement New Zealand Wine Has Accomplished And Why?
Maintaining the premium positioning of New Zealand wine especially from 08 onwards when this advantage could so easily have been lost. New Zealand Wine enjoys a reputation for excellence that many other wine producing countries would love to enjoy. This has been achieved with hard work and dedication on the part of our marketing teams around the various markets.
However there is no room for complacency and in my view this will always be the number one challenge for New Zealand wine moving forward.

What Is Your Personal Vision For The Future Of New Zealand Wine? How Do We Get There?
A single organisation where all members have a say in who guides their industry and where all members can feel assured that their issues will be considered impartially.
An industry that sticks diligently to the premise of premium quality wines and encourages all its members to adopt this position.
We get there by being diligent in our marketing, communications both internal and external, persuading all our members that sustainability does include economic sustainability, and that it is the message of the future.
By leading from the front with a lot of hard toil NZW can continue to build on its favourable track record to date.

The past year has been a momentous one for our sector. For me the past 12 months has been marked by two stand out events.

Biosecurity risk — when, not if

A biosecurity risk to the New Zealand wine industry is very much a case of when.

The monitoring of 28 vineyard sites in five wine-growing regions of New Zealand, has provided the first ever start of the season weather picture for the industry.

Three well-known members of the New Zealand wine industry have been inducted into the NZW Roll of Fellows.