Michael Brett in Hall of Fame 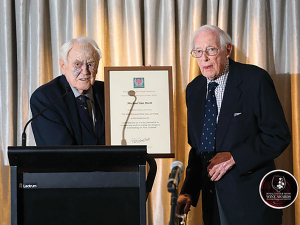 One of New Zealand's first Auckland-based wine commentators, Michael Brett, was inducted to the New Zealand Wine Hall of Fame at the Royal Easter Show Wine Awards this year.

Michael's long journalism career began in the late 60s in Auckland. By 1972, as well as being the senior daily columnist for the Auckland Star, Michael also took on the paper's first wine column. Hall of Fame committee member and former New Zealand Winegrower Editor Terry Dunleavy described Michael at that time as the wine drinker's watchman.

Michael went on to set up the Auckland chapter of the Beef and Burgundy Club, during a period of significant growth in the New Zealand wine world, with areas like Martinborough and Central Otago exploring Pinot Noir, Hawke's Bay testing classic grapes Chardonnay, Merlot and Cabernet Sauvignon, and Marlborough becoming the home of Sauvignon Blanc. Michael remained a commentator on the sector until 2000, and in 2005 became the chair of the newly established New Zealand Wine Hall of Fame. Michael says he was lucky to experince close up the development of the industry up to year 2000 and even luckier to taste what has happened since.