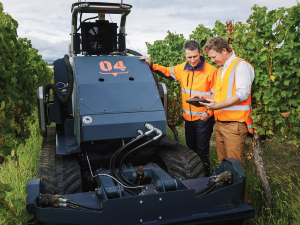 Oxin was developed by the wine company and Marlborough-based agri-tech startup Smart Machine, to combine viticulture, engineering, artificial intelligence, machine learning and robotics. Oxin has “deep knowledge” of vineyard production and processes to carry out tasks such as mowing, mulching, leaf removal and trimming, and marks the start of a new era of technological advancement in vineyards, says Alex.

“We are moving through the Fourth Industrial Revolution and very proud to be leading the evolution of autonomous vineyard tractors across the New Zealand wine industry,” he says. “We believe that this could be a game changer for the wine industry and comparable to the shift in other historical agricultural practices, like when we moved from working the land with horses to tractors.”

The Oxin units - named for the strength of an ox, paired with intelligence - represent a radical improvement in the efficiency of vineyard machinery, “while increasing precision, sustainability and safety across vineyard operations”, says Alex. “They are very robust units and the output of the tasks they do is more precise than what can be achieved using current processes.”

That’s in part because the attachments are bespoke to the unit and integrated into the system, ensuring “very precise and very repeatable” results, he says. And because the Oxin units multitask, there are fewer passes in the vineyard.

Alex says the project was kicked off in 2018, and got into gear “in earnest” by the end of that year. Its success has been down to a symbiotic relationship between Pernod Ricard and Smart Machine, with the former providing key funding and vineyard expertise, and the latter engineering and software.

“We knew the capability we required and they had a very good idea of the platform,” Alex says. “The biggest question was ‘how is the autonomy going to look? And how is the safety going to look?’” Those questions were posed at the start of the project, and throughout the process the technology has met the expectations, he says. “It has always done what it says on the box.”

It took around 12 months to go from proof of concept to a prototype, “and from there that prototype had to demonstrate full functionality of what we wanted”, says Alex. Now four Oxin AVTs are being piloted in Marlborough vineyards, capable of operating across 850 hectares. They autonomously navigate pre-determined “missions”, allocated by an operator. The vehicles have been taught the topography of the block, as well as other relevant information, and will pause the mission if they come across anything unexpected, until an operator has checked it is safe to continue. When one machine is taught more about a block, all the other units learn the information, says Alex. “The thing that is exciting is the amount of data these things collect as they go.” That’s “huge” and the developers are only now working on how they might better utilise that “rich source of data”, he says.

The autonomous and multitasking abilities of the vehicles result in less fuel consumption per hectare than conventional tractors, making them a more fuel efficient and sustainable approach to viticulture, adds Alex.

Smart Machine Chief Executive Andrew Kersley says working in close partnership with Pernod Ricard Winemakers has enabled the creation of “a bespoke piece of vineyard technology with advanced capabilities that has the potential to revolutionise the way vineyards operate”. The company looks forward supporting the New Zealand wine industry more broadly as it innovates to become “future fit”, he says.

Pernod Ricard Winemakers will add an additional five vehicles to its Oxin fleet in spring this year. Smart Machine’s flagship technology will be available for commercial release in summer 2021.