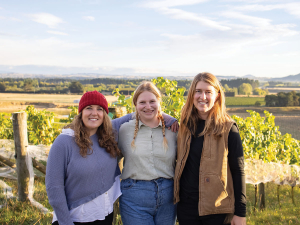 It takes pluck to start a wine company in the wake of Covid-19. But three women under 30 have done just that, starting Three Fates Wine in the Hawke's Bay.

The label was forged last year when Holly Girven Russell, whose father Gordon is the winemaker at Esk Valley, teamed up with Hester Nesbitt and Casey Motley to lease a hillside vineyard at Maraekākaho. She wanted to create an opportunity for the trio to create and run their own business “and hopefully inspire others”.

Holly grew up seeing the winery as a playground, and school sick days were spent in the car visiting vineyards. She didn’t think she would follow her father’s footsteps, until she graduated from university and found herself working in a call centre, and beginning to assess her life. “I realised that learning about wine was learning about history, art, science, and flavour - that suited me.”

When she moved to London in 2014, Holly worked at the International Wine Show, and then the wine buying team at Marks & Spencer, “which gave me a golden ticket to the wine trade”, she says. “I never looked back”. She returned to the University of Auckland to study winemaking and then began travelling for harvests.

Holly had been working in the Yarra Valley when Covid- 19 hit, so she returned to New Zealand with no plans for work. “In isolation, I reached out to the parents of a school friend that I’d heard were looking to step back from their vineyard in Maraekākaho.” They offered a lease on their 1.2 hectare hillside block, but it was more than she could take on alone, so she began to assemble a team.

Holly reached out to her friend Hester, who had just returned from an Australian harvest under similar circumstances. Hester had been working at First Drop Wines in the Barossa, barely aware of the virus starting to snowball, as harvest was in full swing. Finally, as the state borders closed, she caught the last flight back from Adelaide, a day before the last fruit arrived at the winery, leaving the cellar door staff to do a crash course in winemaking. Hester had a depth of experience across different countries, was good company and a hard worker, says Holly. “Coming from a farming background, I knew she could bring the agricultural experience and nous I didn’t have.”

Holly also anticipated they would need a local person to run the day-to-day on the vineyard. “I had only met Casey a few times but knew she was passionate about the hands-on approach to winegrowing after her years working at wineries in Germany, Austria and France.” At the prestigious Domaine De Montille in Burgundy, Casey’s passion for the vineyard was unlocked. She had returned to New Zealand to work in the vines at Millton, her European way of life coming with her.

Holly intentionally chose to work with women, because “I have never worked at a winery where the senior winemaker was female, despite working alongside a lot of incredible female cellar hands”. She is proud of their inaugural vintage of Cabernet Franc, Albariño and Arneis. “You can’t lose anything when you start with nothing,” she jokes. The trio learned quickly and although there were many sleepless nights, “we’re delighted with the quality of the fruit”. They had a small but clean crop, she adds. “Fermentation went well with indigenous yeasts taking care of the lot; everything is now tucked away in barrel.” Holly says they have been warmly embraced by the Hawke’s Bay wine community and given plenty of support. “Some especially inspiring and helpful players have been Jenny Dobson and Bridget Wilton. Obviously, sharing a household with rockstar winemaker Gordon Russell all harvest has been pretty helpful too.”