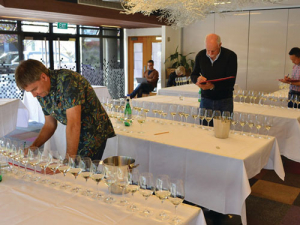 Judging at this year’s International Aromatic Wine Competition. In front, Simon Waghorn and behind, Chair of Judges, Jim Harre.

For a show that began with such international gusto, the New Zealand Aromatic Wine Competition has morphed into something far more parochial, but perhaps it is all the better for it.

The annual competition broke new ground this year when the new chair of the show, Jim Harre, introduced the international 100 point judging system.

Harre says the wines entered also represent a sea change. Not that it’s been immediate.

When the competition began seven years ago, it was initially open to aromatic wines from anywhere in the world.

This year’s winner reflects the growth of entries from North Canterbury and the South Island in general – particularly of aromatic white wines that are, in large part, transparent reflections of their variety and region.

The champion wine of the show was the humbly priced ($16.99) Waipara Hills Waipara Valley Riesling 2016.

“I think one of the things we’re seeing across the board in New Zealand wine shows right now is very high quality fruit coming through in styles like Riesling, Sauvignon Blanc and other aromatics which are not relying on expensive oak or expensive processes in winemaking,” says Harre. “I think we produce wines in New Zealand that are often very drinkable without needing anything done to them in the winery. It’s an incredible strength in our industry that the quality of fruit is so high.”

The other thing that Harre enjoyed seeing this year was the evolution of the show to using the 100 point scale. “I’m a big advocate of wine shows having transparency and this was a good step in that process. The more we know about the process for selection of wines and how they end up as being regarded as the best is, I think, very important for the consumer.”

The move away from international entries in the New Zealand Aromatic Wine Competition has been slow but steady. “The first morph would have been the strong pressure to include Sauvignon in the show and that was reasonably early on. That’s been followed by stronger involvement from New Zealand aromatic producers throughout the country, along with a steadying decline from international aromatic producers,” says Harre.

He suggests that the greatest strength of the show is its growing regional focus, even though the name doesn’t reflect it. “There’s a strong regionality about the New Zealand Aromatic Wine Competition and I personally believe we need to have more exposure of regional excellence, whether that be by wine show or food show or in any other sphere,” he says.

“When we look at the number of tourists coming through the country, we need to be able to identify to them the sorts of things they should be looking for to eat, drink and view. I think the Hawke’s Bay and Marlborough wine shows are excellent because they tie the wines into the next level with the food involved and sending that message out is really important for New Zealand tourism.”

Asked whether the New Zealand Aromatic Wine Competition should take the next step and become a regional Canterbury wine show, Harre says that decision is up to the A&P show directors – and, possibly, consumers.

“This year we will see a great celebration of Canterbury wine, thanks to the winning champion wine of the show. I think that when you look at aromatic wine styles in this country, they certainly don’t get the level of support by wine drinkers that they should. We in the wine industry love the spectrum of the grape and the region that aromatics can show because there’s so little done to them in terms of winemaking complexity. To me, it’s really good to see that level excellence shown in this direction.”

The consumer would appear to agree, if a sample group were anything to go by.

Yours truly, the writer of this story, took the winning wine home this year and poured four unsuspecting beer and spirits drinker a taste of the 2016 Waipara Hills Riesling. Their unanimous response was this: “If all wine was like this, I’d drink more of it.”