Ostler Wines: Handing on a legacy 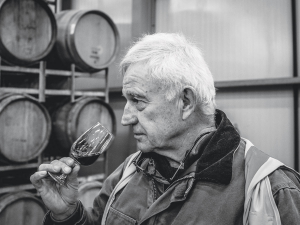 Breaking dirt on Waitaki Valley limestone 20 years ago was a "huge act of faith", say Jim and Anne Jerram.

And as they celebrate the recent sale of Ostler Wines to ACG Wines Ltd, they say they would do it all again "in a heartbeat", despite myriad challenges.

"We were dramatically over-optimistic; we really didn't know what we were getting into," says Jim. "Two decades on we know quite a lot about the nuances that go with a new region, and what makes the wine so special - and what's made it difficult."

Jim, at the time a GP, visited the Waitaki in 1998 with Anne's winemaker brother Jeff Sinnott, discovering the "bit of dirt" that would become Clos Ostler.

After two years of due diligence, with modelling based on data from three triangulated weather sites, they purchased the land.

Jim, with some experience of high country farming in the 1970s, says having Jeff by his side on the vineyard, and Anne keeping her health research role and income, were crucial parts of the mix.

They had thought the lie of the land would protect them from the frosts of Central Otago, but the Waitaki frosts were even harder than those of their southern neighbours. Jim remembers many sleepless nights watching the temperature gauge closely, with helicopters on standby. When they eventually did get frost machines on the land the climate had started to change, with the valley warming up.

Commercially, the area's yield has always been a challenge, which meant that finding investment in the brand was also difficult. However, Ostler Wines overcame the hardships to produce a standout range of wines, including the much-medalled Ostler Caroline's Pinot Noir. "People talk about Central Otago being viticulture on the edge; I think we are just over the edge," says Jim. "But it's that edge which is perhaps also the magic line."

The wines are "liquid geography", he says. "They are different from everywhere else; not big fruit-driven wines, but very distinct. You can pick them in a line-up from anywhere in New Zealand."

Jeff told them from the start to expect the wines, stylistically different to Central Otago Pinot Noirs, would not initially be understood, says Jim. "And he was right. It's taken many years to get that recognition."

The couple feel "incredibly privileged" to have pioneered a new region, talking of getting their hands in the dirt one day, and in front of sommeliers in Sydney the next. "We've worn out a lot of shoe leather, kissed a lot of frogs, and made a lot of magnificent friends along the way."

And they are "thrilled" that ACG Wines plans to take the company to the next level. Ostler Wines will be operated by ACG Wines Ltd's Lindis Group, a luxury hospitality company with three lodges in New Zealand, including the Lindis Lodge in Ahuriri Valley.

The company bought all the Ostler Carolin's Pinot Noir wine stock, the Ostler and Caroline's brands, and the vineyard on which the grapes for that wine were grown.

Anne says the new owner's connection to the Waitaki Valley "really matters", given the effort they have collectively made to build the region's profile.

"To be passing the baton on to people who really do care about this region, have good wine sense and palates, and for the ability, as they say, to 'polish the diamond' of the Caroline's Pinot Noir."

But the Jerram's are not entirely off the hook, retaining their cellar door, The Vintners Drop, in Kurow, along with a small Lake Waitaki vineyard. They look forward to the region's continued growth.

"It has been a wonderful ride alongside the other Waitaki stalwarts," says Jim.

"And it is timely for us to ease back with the recognition of the valley as a tiny part of New Zealand's best."