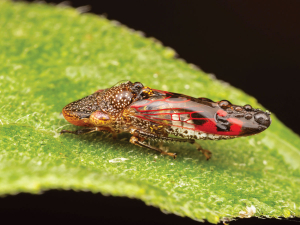 While the Covid-19 virus dominates the news, commercial growers overseas are grappling with a bacterial invasion. California wine grape growers have been plagued with Pierce’s disease (caused by Xylella fastidiosa) for over a century, and despite interventions by government, scientists and wine producers, no cure has been found. The Xylella response in California still costs US$104 million a year.

In Italy, Xylella caused an outbreak of Olive Quick Decline Syndrome in 2013. When it was diagnosed, growers were told to burn down damaged orchards (including 1,000-year-old olive trees), and at first many growers resisted. Over a million trees were eventually destroyed over two years, but the disease still haunts the Apulia region.

Rodrigo Almeida runs a Xylella lab at UC Berkeley. He says if he was asked in 2012 (the year before the Italian outbreak) whether Xylella would be a problem in Italian olive groves, he and other researchers would have laughed. “We would have said, ‘sure, we can see academic hypothetical scenarios but in reality, probably not going to happen’ and then ‘bam!’ There it is, it’s really devastating.”

Rodrigo says he doesn’t think Pierce’s disease will be a problem in New Zealand, because it’s “just too cold”. The numbers tell a different story. The most severe outbreaks in California occurred in Temecula, where National Oceanic and Atmospheric Administration (NOAA) recorded an average winter temperature in 2021 of 11C, and the northernmost cases of Pierce’s disease are in Mendocino, where NOAA reports an average winter temperature of 8C. In New Zealand, data obtained from Accuweather showed average July temperatures of 10.3C in Marlborough in 2021.

There are other factors at play for Pierce’s disease such as rainfall, number of growing days and proximity of vines to riparian areas, but our warming climate could be the loophole Xylella needs to take hold here. The European Commission recognizes Xylella fastidiosa as a major plant threat, and it is on the Most Unwanted list here in New Zealand and Australia.

This is an aerobic, Gram-negative bacterial pathogen. Aerobic means it needs oxygen to survive; Gram-negative means that you can’t use a violet “Gram’s method” stain to identify it in the lab. The fastidiosa species name means it is “fastidious”, or choosy, about where it reproduces; it doesn’t grow well in a lab, only in a host plant (and it has over 300 host plants, including many New Zealand natives). All this makes Xylella confoundingly difficult to research.

Many subspecies of Xylella fastidiosa have been identified, the four primary ones are: fastidiosa subsp. fastidiosa, which leads to Pierce’s disease in table and wine grapes; multiplex, which causes leaf scorch on peaches and plums; pauca, which triggers Citrus Variegated Chlorosis; and sandyi which unleashes Olive Quick Decline Syndrome. A current B3 (Better Border Biosecurity) project on Xylella is focussing on development of a quick and accurate tool for identifying subspecies.

Once Xylella gets into a grapevine, the bacteria cram together into a biofilm which builds up in the xylem and disrupts the flow of water to stems, leaves and fruit. The result is Pierce’s disease: eventual dehydration and death, regardless of how much water is available in the soil. Remember the myth of Tantalus? He was cursed to stand in a pool of water which would drain away every time he wanted a drink.

Xylella needs a vector to spread it. In California, the most common vectors are sharpshooters, which feed on the mineral-rich xylem of one plant and then on a nearby plant, spreading the bacteria. We don’t have sharpshooters in New Zealand, so if we keep those out, we’re golden, right? Wrong: if a plant with Xylella slips through the border, other xylem-feeders already in New Zealand (such as spittlebugs) could transmit the bacteria.

Dr Jessica Vereijssen at Plant & Food Research is currently working on xylem feeders found where citrus, wine grapes and apricots grow. Her trapping in 2020 confirmed that the foreign spittlebug Philaenus spumarius (the same species involved in the destruction of Italy’s olive trees) is already here. We don’t know yet if it could spread Xylella in New Zealand.

Biosecurity as a net, not a wall

New Zealand Winegrowers (NZW) is a signatory to the General Industry Agreement (GIA) with government. In return for engaging and investing in biosecurity, the GIA gives them a seat at the table when biosecurity decisions are made which affect the wine industry. Dozens of other sectors have signed the GIA.

Each stakeholder in our biosecurity system represents a single approach or a single ‘net’. Imagine a single piece of netting put up in the wind – it would give you a small chance of catching a biological threat. Take many pieces of netting, all overlayed at different angles, and you’ll have your best chance.

MPI has pre-border, border and post-border controls, with specific tactics for each. With limited financial resources, though, how do we know where our spending will have the greatest value? Biosecurity leaders here and abroad often structure their investments according to something called “The Invasion Curve”.

The curve suggests that prevention is the best investment, costing relatively little and impacting small areas, while providing a high return. Once an organism has become established, however, eradication gets more expensive, while the net economic benefit shrinks.

Finally, if eradication is unsuccessful, a period of containment may be settled on for long-term control, during which spending continues to rise but is less effective over time (because a higher number of infections must be managed).

Does this sound familiar? We’re going through it with Covid-19, and our Covid-19 response can inform our Xylella response.

To prevent entry of Covid-19 into the community, we currently require that people quarantine on arrival. MPI has strong measures in place to protect your crops from Xylella: the Nursery Stock Import Health Standard requires that any Xylella host plants entering New Zealand from countries that have Xylella (Europe, the Americas, the Caribbean, India, Taiwan and Iran) be quarantined for at least six months in a post-entry quarantine facility. The cost is covered by the importer.

New Zealand initially followed a policy of total eradication when Covid-19 entered the country. A similar eradication policy for Xylella could potentially include locking down vineyards and orchards and mandating the destruction of infected plants.

Our ‘traffic light’ system designed for containment of Covid-19 allows businesses (and hopefully, soon, borders) to open again – as long as vaccines can keep the pace against variants. What might Xylella containment look like? Frequent testing for the bacteria and its vectors, and restrictions on movement of host plant material between regions. If global warming continues as projected over the coming decades, the eradication and containment of Pierce’s disease might be impossible in New Zealand.

In that case growers will face long-term control decisions to protect our wine industry: scientists at UC Davis have cultivated Pierce’s disease-resistant varietals which are being tested in high-risk regions in California, Texas A&M has an organic inoculation in trials and in January 2021 Spanish company Lainco made news for their release of a eucalyptus oil-based topical spray solution.

Insecticides can be applied to kill or restrict the insect vectors, but United States entomologist Alexander Purcell warns that sharpshooters can develop resistance to insecticides over the long term. The US Department of Agriculture have introduced a parasitic wasp for biological control of vectors, and Ridge Vineyards in California has had success with the application of a dusting of kaolin clay which chokes the sharpshooters when they try to feed.

As a last resort, abandoning an infected region might be a winemaker’s only option. Callaway Wineries lost a fifth of their Temecula leases due to damage from Pierce’s disease, and now produces their “Callaway Coastal” line with grapes bought from as far north as Monterey County.

Science to the Rescue

A New Zealand’s Biological Heritage (BioHeritage) team called “State of the Art Surveillance” is working now on two technologies which could help police Xylella and its vectors. Dr. Carl Wardhaugh of Scion is deploying insect traps at the Port of Tauranga to see which insect species enter through the port. B3, Scion, Plant & Food Research, the University of Canterbury and Wilderlab are collaborating on this project.

Each catch is sorted and identified by hand, before some samples are processed into an ‘insect soup’ and finds out which species are present using eDNA tests.

The eDNA results get compared to a reference library of known insect threats. The team aims to find a way to make this process operational on a national scale, giving New Zealand a good chance of nabbing sharpshooters (or any other xylem-feeding insects that could spread Xylella) at the border.

Another BioHeritage project combines photography of urban trees with machine learning to check for disease. Vehicle-mounted cameras will travel prescribed routes fortnightly to take pictures of urban trees (blurring private information such as car registrations and house numbers). Computer algorithms can identify the trees in the images by comparing them to a reference database, and then send up a notification if the health of any trees visibly declines over time. The study is designed to measure tree diseases, but the model could be adapted for deployment in vineyards for Pierce’s disease.

Pamela Niskanen is affiliated with Te Paepae Pūtaiao, The Centre for Science Communication at University of Otago.

The Central Otago region is steeped in viticultural history.

In a series profiling this year’s Bragato Trust Scholarship recipients, we talk to Rebecca Fougere about the wine industry’s myriad opportunities.

Weevils in the Vines

Increasing reports of weevil damage to vines in Marlborough, Hawke’s Bay and Wairarapa led researchers to ascertain the culprits.