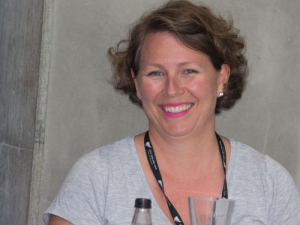 As chair of the third day’s session, Emma Jenkins MW explained, evolution cannot happen unless you have already embraced and explored.

Embracing is having the confidence in “your sense of place”, she said, which then allows you to move on to explore.

Beginning to explore means you need to be open to new experiences, without losing sight of who you are. “That is a confident explorer.”

As for evolution, Jenkins said this is the “quiet confidence to just be still and see what is happening around you.

It is listening to and often being one of the people who pushes through the boundaries, but not getting caught up in fashion.

“I think the wine industry is quite prone to the Emperor’s New Clothes scenario. We have to be careful to guard against that and make sure we don’t end up becoming as rigid as some of the people we are trying to rebel against.”

A number of individuals attending the event, had their own idea of New Zealand Pinot Noir’s evolution. As can be seen by the comments below.

“There is an inherent comfortableness in the wines now, where people are understanding their sites and delivering the wines to a particular package that has a lot more honesty and accuracy about it.

“If I think back to my earlier years, we were trying to find where quality was and pushing and trying to think that this might be great. Nowadays, there are people with vineyards they know will never produce a great wine, so it is consigned to a different label. Back in the early days, most of us only ever had one label of Pinot. Whereas now, most of us have several different Pinots.

“So that notion of comfort is something you can really only get with experience and making wines from the same sites. For me it is very exciting as a producer to be in my 21st year as a winemaker.”

“Initially in the first few years, we tried to do way too much and focused too much on winemaking interventions. The wines we made were too big, too ripe and with too much oak.

“We thought that made them impressive, but really, they lacked any soul and any sense of where they came from.

“We thought bigness equaled greatness, but we made these big, clumsy, show pony Pinots that said nothing about Marlborough, or our place.

“So we tried to embrace the growing and began to learn that was where the intervention was required. We have also tried to notice what the vineyard is trying to give us and embrace that.

“In the early years, we tried to make layers and complexity happen in the fruit from young vines and it felt very forced. But over time, we learned to back off on the winemaking interventions and to make wines that had more purity.”

“It is very important to understand Burgundy for new world winemakers. You have to know how that place runs, how it works, its history and where it has come from.

“In a way it is a bit like here in New Zealand where we have some wonderful artists who put paint on canvas. But in the 50’s and 60’s, they all went through the Canterbury Ilam Art School. They were taught by someone how to draw, how to do pencil drawings and how to do wood cuts and prints. They had to learn the craft of actually painting.

“How they evolved after that, was everyone’s own journey.

“I think as a community of winemakers, we have all gone through art school and now we have to show our own expressive idea of what we can do with the canvas, which is our land and the grapes that are grown there.”

“If this (Pinot Noir 2017) was taking place last century, I think we would have mentioned the B word far more times. But there has been a sea change and many of you in this room have played a part in that. Over the last 15 years, possibly even more, many of us were brought up to believe that Pinot could not be a great wine outside of Burgundy. That is now not the case.

“I decided to look at our data base of tasting notes on Jancisrobinson.com and see how many Pinot Noirs in there have scored more than 18 out of 20 points.

“There were 0.1 percent of tasting notes on Pinot Noir that scored over 18 points. That comes down to 140 wines. They are mostly from four places.

“In fourth place with 18 was Oregon.

“In third place with 37, was Australia.

“Second with 38 was California, pretty much all of them on the cool Pacific Coast.

“Now in first place with 46 wines scoring over 18 points – was New Zealand.”

“I was last here three years ago for the Air New Zealand Wine Awards and there has been huge strides forward in those three years.

“In styles, confidence and the way you show respect to Pinot Noir. I see much less make up in the wines and they are much more true to their place, true to their personality and showing that they are proud and confident, without being arrogant in any way. You now don’t need to mention the B word. You are much more confident, in (believing) that the place you have, can give you these wines. I don’t think three years ago that was obvious for you. I can see it in the wine styles – they are much more confident as well.”

– Michelin Star Chef, and owner of The Harrow at Little Bedwyn - UK

“It is very similar to food these days, which is clean and precise. No cream, no butter, just absolutely fresh. That is what I see in New Zealand wine. Purity, precision, cleanliness.

“In the past (New Zealand winemakers) were trying to make a dirty old Burgundy. If you look at Burgundy now, there are some new kids on the block and their wines are much cleaner, fresher. But the old guys are still doing the old things. Unless they change, they will suffer. Clearly New Zealand has got that market of modern, fresh Pinot Noir.”