Remove the arrogance from wine 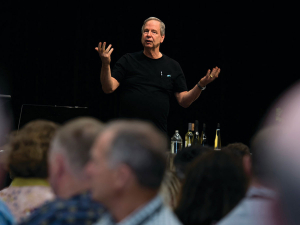 Master of Wine Tim Hanni didn’t hold back during his session on food and wine pairing. Instead he let rip with a range of statements that had many attending nodding in agreement.

Firstly, he took to the stage admitting he was on a crusade to disavow the notion that certain wines are only at their best when paired with certain food.

Hanni explained how wine and food matching is not steeped in history – in fact he claimed, it had only become a thing in France around the 1960s. By adhering to the standards that have now become ingrained, he said the individual consumer’s biological senses have been ignored.

And the statement that people’s palates mature, so they will grow out of commercial wines or a dislike of certain foods, was pooh poohed. He referred to famous chef, Julia Childs, who had a genetic disposition that made coriander an anathema to her.

“I guess she never grew up, her palate never matured,” Hanni joked to make his point.

The second point he made, voraciously, was regarding the “arrogance” of certain industry members, who categorise wine in specific ways.

What’s more he said this style of marketing and talking about wine is turning consumers off.

When consumers hear their wine of choice is considered “commercial” or not “sophisticated”, the harm done will last for years.

“I have heard a lot of banter about – ‘oh these are commercial wines, or beginner wines’. People take wine descriptors personally – so don’t do that. Stop it.

“They are not commercial wines, they are wines that are made in a larger quantity that are enjoyed by millions of people. What the hell do you think? (Many people) think they don’t like wine because they are told the wines they drink are immature, unsophisticated and for uneducated people. We have no clue the damage we are doing by categorising wine. So cut it out.”

Well that got people talking amongst themselves.

“We need to educate the wine trade and hospitality professionals, and that goes for sommeliers. Quit what we are doing and think about a new pathway. Wine one-oh-one. It is important that you learn how and why other people are different, so when we get to wine education we have a better understand of the market we are serving.

If you can’t smell, you can’t taste, was another point Hanni went to great lengths to explain at the session. With tiny containers of different spices, (cinnamon, cumin, all spice and garlic salt), he told all in the room to hold their nose and have a taste of each spice individually – without smelling it first. The response? No one could pick up the distinctive flavours until they released their nose. It was somewhat of a wow moment. His point though was how the sensory cycle of storing and understanding smell and taste is different in every culture. The taste of cinnamon for example, brought up memories of apple crumble, and for some lamb. But as Hanni pointed out, if New Zealand was to utilise that theory in a country like China, it would be disastrous – simply because they don’t use cinnamon, so there is no sensory or understanding of smell and linkage. So beware the language you utilise to describe your wines. If the smell or taste is unfamiliar or disliked – what damage are you doing to potential consumers?

He also had a word of warning to Sauvignon Blanc producers, reminding them that preferences, attitudes in behavior that are a response to stimulus is “the psychology of understanding the markets and segmenting the markets appropriately.”

“If you don’t do that, there are going to be so many styles of Sauvignon Blanc, there is going to be so much chatter, so many options, that like Syrah, like Merlot and Riesling, that it just starts to become noise. Then because we can’t communicate with consumers on their terms, they will begin to drink something else, because they don’t know what the hell is going to come to the table.”

His last plea was to celebrate the diversity of consumers out in the world.

“Work hard to promote wine without all this baggage and negative association for making people feel stupid. Demonstrate to people how to enjoy their wine and food so that they can have a steak with Sauvignon Blanc. Why not?

“If you want to sell more New Zealand Sauvignon Blanc, learn to taste the wine and think – who would like this? What market segment? How do I communicate with them? How do I create the context for their enjoyment? Stop pairing wine and food and pay attention to what goes on.”