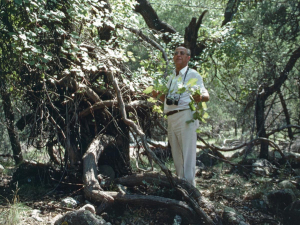 The growth of the Marlborough wine region over the last 40 years is one of the most remarkable success stories of the world of wine, and one which many regions and countries in both the Old and New World can only hope to emulate.

One aspect which is so remarkable is that this growth is so recent, in fact only two generations old! And the second remarkable aspect is that the growth is mostly due to one grapevine variety Sauvignon Blanc (and interestingly mostly one clone). And this extraordinary growth can be related to the excellence of quality and uniqueness of style of the Sauvignon wines produced in Marlborough.

The shadow is an infectious group of fungal diseases, called generically Grapevine Trunk Diseases (GTD), and Sauvignon Blanc is one of the most susceptible varieties to these diseases. While one of these diseases has been known for around two centuries, many are new in their impact on the world’s viticulture, and there are some commentators who suggest that the impact of trunk diseases in modern times will be greater than the impact of phylloxera ever was, or will be.

I first learned of the susceptibility of Sauvignon Blanc to trunk diseases in November 2014 during a meeting of the International Council of Grapevine Trunk Diseases. This conference involved a visit to the Nuriootpa Viticultural Research Station in the Barossa Valley, where we inspected the impact of trunk disease on a variety block. The particular damage to Sauvignon Blanc was so very evident.

Many studies including those in New Zealand showed that as the vines age they are more likely to show symptoms of trunk disease and eventually die. The first symptoms or death may show with vines as young as five years and vine deaths are common for vines 10-20 years old, especially if another stress like water logging is evident. The median age of Marlborough Sauvignon Blanc is around 13 years old.

Growers in Marlborough have seen their own-rooted Sauvignon Blanc vineyards destroyed by phylloxera from the 1980s onwards. The impact of phylloxera is very obvious and devigouration and death can occur within two years. Trunk diseases are very different. They are described as insidious. The vines may not show any symptoms for several years following infection, and by this time the fungi will have spread perhaps throughout the plant.

The control of trunk disease is now becoming well-known and is a two-step process, firstly to reduce/avoid infection, and secondly to eliminate infection in a process of vine rejuvenation. Avoiding infection is relatively easy in Marlborough. There are a range of products available to spray or paint on winter pruning wounds which help prevent the invasion from fungal spores landing on these wounds. New Zealand is lucky in this regard. For example, Canada has no such products registered for this use. Winter pruning wounds are the major point of entry of the fungus, especially during wet weather.

The second step, that of vine rejuvenation will be a practice that should now be concerning the majority of Marlborough Sauvignon Blanc growers who have not been previously protecting pruning wounds from infection, and who very likely have symptoms of trunk disease in their vineyard. This procedure is relatively simple, that of selecting one or two suckers from the base of the plant and training them upwards as a new trunk or two. There is a very important proviso to this procedure however, which is that is that any new trunks should originate at least 20 to 30 cm below any staining in the existing trunk to avoid being infected. The retrained vine can be cropping in one or two years, and of course should be wound protected.

Trunk renewal is not new

Trunk renewal has been proposed in Australia for control of the trunk disease Eutypa for the last two decades or so, where it is called by the non-precise term “vine surgery”, but in fact the practice predates this by millions of years! Grapevines in their native habitat are multi-trunked as is shown in the accompanying photograph taken of wild vines in Texas. (See Fig 1). Furthermore, trunk renewal has been practiced for likely over 100 years by grape growers in the North East of the USA where winter freeze injury is common.

The practice was known as “vine renewal” or “trunk renewal”, and “trunk renewal” is the term currently used in
this region to describe the practice. The author regrets the present New Zealand practice to treat the noun “trunk” as a verb, and so say “retrunk”; does “recar” mean to renew one’s auto?

Trunk renewal must be timely

It is important to commence trunk renewal early, before the fungal infection has developed strongly in the trunk, and has travelled to the base. This requires checking for first symptoms in the block and beginning trunk renewal at least in nearby vines. It may also involve modifying practices so that suckers are no longer destroyed but saved for use in trunk renewal.

Some propose that blocks be treated uniformly and so growers might wait for a proportion of vines to be symptomatic or even die (say 20 percent) before trunk renewal is adopted on the whole block. Under this scenario yield is lost for at least one year;
my suggestion is for much earlier intervention and saving more of the original vines by reducing the spread of infection. I call this procedure “timely trunk renewal”, and it is supported by economic studies in the USA and New Zealand.

I have been giving workshops and field demonstrations on these procedures for over five years to clients and grower groups in many countries and regions.

An important component is to teach recognition of symptoms, especially in early-indicator spurs, and modifying pruning to reduce infection.

I propose working with Marlborough consultant Mark Allen to offer seminars about trunk disease control early in the 2020 pruning season throughout New Zealand.