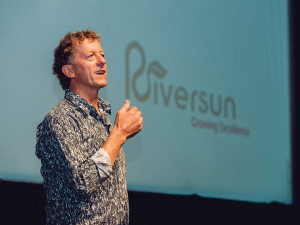 The term sustainability comes with a great deal of corporate greenwash, Geoff Thorpe of Riversun says.

“If we can’t be doing the same thing on the same land in the same community, on the same planet in 100 or 1000 years, then it is not sustainable.”

Every single process, every single aspect of Riversun was looked at through the eyes of the above statement, with a goal of 2020 set for becoming a truly sustainable business. And the word he chose to encapsulate everything the company undertook, was Toitu.

“It is a Maori word which means enduring, permanent, eternally sustainable.”

Heading towards Toitu, Thorpe says the importance of us all learning to tread more lightly on this earth cannot be underestimated. In his own lifetime, he says the world’s population has tripled. Since the industrial revolution, 80 percent of indigenous forests have  been destroyed. “And we are still knocking down 20,000 hectares a day. We lose about 33,000 hectares of land a day to desert.”

In terms of oceans, he said we are pulling close to 175 million tonnes of fish from oceans every year, and by 2050, it is predicted there will be a total collapse of fish stocks. CO2 levels have gone from 275 parts per million before the industrial revolution, to 400 parts per million now.

All of these factors highlight the importance he says of acting now, without hesitation.

As to what any one person or company can do, Thorpe said Riversun kicked off an organic based programme in 2012 with a vengeance. Firstly, herbicides in the field nurseries were eliminated and he converted their field nursery disease management programme to an organic one. All synthetic fertilisers were next to go, nursery blocks were rested and green cropped every third year, companion planting was added and a compost programme developed.

The harder issue was replacing close to 200+ km of black PolyMulch a year with something more sustainable.

“Because of the soil contamination, it can’t be recycled. We thought, well clearly we can’t be doing this for the next 100 or 1000 years, so we started experimenting.”

Through all these moves, the Toitu of the business also had to be considered. Thorpe listed three of the biggest surprises that have come to the fore.

“When we changed to an organic spray programme, we halved our costs and got better control.

“Initially we replaced nitrogen fertiliser with organic forms, and within two years we found we could reduce it by 50 percent. By next year we will add no nitrogen fertilsier what-so-ever.

“Then there was the carbon footprint. We have just this month achieved CarboNZero certification. Again I knew it was the right thing to do, but I thought it was going to be expensive. We were very pleasantly surprised to find that the cost for us to be in the CarboNZero programme  is 0.1% of our gross revenue. That works out at about half a cent per vine.”

Given all the results, both in terms of providing endurance for the next 100 and the next 1000 years, Thorpe says his experience begs the question – what are we all waiting for?