Taking Pinot on the road 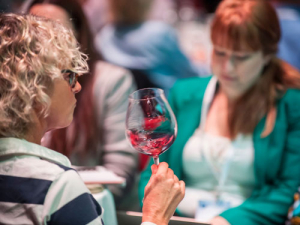 You hear the words ‘road trip’ and think Thelma and Louise, but a little more planning was required for the 600 people who took three trips around New Zealand’s six Pinot Noir regions earlier this year.

The road trips were part of Pinot Noir NZ 2017, and were metaphorical rather than real. But still. That’s a lot of wine and it is, literally, impossible to look at, taste and form an indepth impression on each and every one. A wine writer commented that another approach to the regional tastings had to be found – and fast. This is easier said than done.

A sit down tasting might be more contained. This could feature one wine from each producer, but many might wonder why we couldn’t taste more wines and have the invaluable opportunity of talking with winemakers, owners, marketers and those intimately involved with growing grapes and making wine. And since so much time is spent sitting at wine conferences, do we really need any more long sit-down affairs?

It’s easy to see – and taste – why the road trips have evolved into rooms of people who have long since tired of sitting and are now focused on tasting, talking and sharing the Turangawaewae of their wines.

Each of the three road trips had its highlights. Here are my stand outs.

This was the most diverse road trips, spanning the widest geographic area and biggest range of climates, soils and elevations.

Auckland is home to the smallest amount of Pinot Noir produced anywhere in New Zealand but it is significant due to the quality focus of Kumeu River Wines – a consistent high hitter with Chardonnays and now making pretty, floral, red fruited Pinot Noirs.

North Canterbury had the most diverse range of wines in this room, unsurprisingly, given its vineyards span the gamut of cool maritime Waipara to cool inland Waikari. Soils vary massively from loam to limestone, with other variations.

Like the Wairarapa, North Canterbury’s vineyard’s are beaten up regularly by wind, which can intensify savoury flavours and firm tannins. Pegasus Bay and Pyramid Valley impressed me the most. The library release of 2009 Pegasus Bay Prima Donna Pinot Noir was one of my top three wines of the entire Pinot Noir NZ 2017 event. Other top drops included: 2013 Bell Hill, 2015 Black Estate Home Block, 2015 Pyramid Valley Angel Flower and 2015 Greystone Pinot Noir.

Savoury, dark and intense. These words apply to Pinot Noir from this region, thanks to high quality wines from Martinborough, Gladstone and northern Wairarapa. Favourites for me were: 2015 Ata Rangi Pinot Noir, 2015 Big Sky Pinot Noir, 2015 Craggy Range Te Muna, 2015 The Escarpment Kupe, 2014 Julicher, 2015 Te Kairanga Runholder and 2014 Urlar Select Parcels - yet to be released, this is the first wine from Carol Bunn. She is the new winemaker at Urlar Estate, and making choices to ensure this is a winery to watch. And let’s hear it for Wellington Wine Country. The name makes geographic and logical sense. Wai words abound and cause confusion internationally. Wellington Wine Country offers great potential for tourism. Enough said.

The two regions of Nelson and Marlborough are perennially overshadowed by their southern neighbours and Marlborough is the most underrated over performer for Pinot Noir. Highlights are too numerous to name and star players are consistently raising their quality. The most outstanding, juicy, deliciously savoury Pinot Noir from Nelson is the 2015 Neudorf Moutere Pinot Noir. History showed earlier this year (in an old bottle of 2006 Neudorf Moutere Pinot Noir) that it has stellar aging potential.

Marlborough’s star performers are a long list, but the biggest wine company in the country ranks high for me right now. Brancott Estate winemakers Patrick Materman and Jamie Marfell are growing quality from $16 to new Pinot Noir peaks around $100 – yet to be released. I am a big fan of the red fruited Stoneleigh Pinot Noir, particularly the Rapaura Series, which reveals more depth of flavour and a savoury twist. Look for the company’s new Brancott labels later this year.

This region’s presentation has it in spades over all others.

Twenty years on from the very first New Zealand Pinot Noir Celebration the event that has been labelled as the Best Pinot Party in the World, is set to celebrate a milestone.