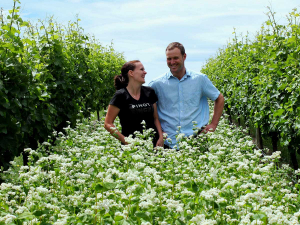 Jason and Anna Flowerday in a field of buckwheat.

"We have taken hay off ours and trialed vegetables last year," says the 2020 Gourmet Traveller Wine New Zealand Viticulturist of the Year and known master of the cover crop. "You can utilise your mid-rows for a different income stream."

Jason has been planting cover crops since the winter of 2004, after returning to Marlborough from Australia to take over the boutique company with his winemaking wife Anna. He'd had plenty of practice across the Tasman, where older soils and drygrown vines relied on winter plantings for organic matter. "The old boys just used it as a competition of who could grow the best cover crop in winter."

These days he sees a similar drive from some Marlborough growers, peering amid the rows to see whose buckwheat is blooming the best. After a few decades of trials, he believes diversity is the most important aspect of mid-row planting, along with knowing what you have and why you have it. "It's knowing what you are trying to achieve by planting a cover crop - opening the soil, trying to feed the microbes you already have, or you might want to increase your organic matter, or be looking to add more nitrogen. If it's a summer cover crop, is it just for beneficial insects?" Whatever the purpose, "you have to have a plan", he says. "The biggest thing is knowing why you are doing it and what your cycles will be and thinking 'ok, what am I trying to achieve?'"

As well as purpose, he'll consider matching soil type with plant species, with wetter sites able to sustain a longer tap root, while dryer soils might be left without a summer active crop, which will take moisture away. "It's a big picture thing. The good thing about Anna and I is we relate back to wine quality and what we see in the wines... The end wine quality is what we are doing it for," he says. "Your soil is the foundation of wine quality."

The couple, who moved Te Whare Ra to a combination of organic and biodynamic management in 2007 and gained full BioGro certification in 2012, are relentless about soil tests, and about long-term plans to feed the soil, rather than any "quick fixes". Jason says these days he has a bit of a recipe for plantings and works closely with Kiwi Seed in Blenheim to learn about successful seed trials that might prove a good fit. He's also happy to try something new, like the kale, onions, beetroot, and carrots, along with rocket and coriander, that he planted in some rows in the autumn of 2020.

That was a bit "hit or miss", but every year is an opportunity to improve the health of the vineyard system, he says. And sometimes the vagaries of nature outweigh the best intentions. "This spring I tried to get in an early cover crop, but the season didn't work out, so in the end we didn't put anything in."

He and Anna keep their cover crops to the mid-row, weeding the undervine area to reduce competition for nutrients and water. Jason stresses that he wouldn't cultivate and plant every mid-row every year, but instead runs an alternate system with one row being used for cover crops, summer and winter, and the other sown with sward species. Every three to four years he swaps them over, with one year for restablishment of new permanent sward. This regime allows for the soils to have a chance recover from the compaction of machinery. The region's vineyards have suffered from "years and years of people driving on those mid-rows with no remedial work on them", he says. "But I have certainly seen an increase in productivity once you open your soils up and use cover crops."