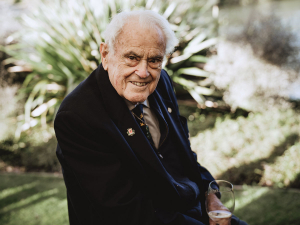 Putting the "bubble" in Hunter's sparkling wine is just one thing Jane Hunter has to thank Terry Dunleavy for.

"His legacy intertwines with us in quite a few ways," she says in the wake of the industry's stalwart's death in March, aged 93.

Jane clearly recalls the 1988 London Trade Fair, in which New Zealand played host, in an "absolute coup" for New Zealand wine, brought about by Terry's work. "He could talk people around," she says. "And he never gave up, he was totally persistent."

He and her late husband Ernie were great friends, thanks in part to Ernie being Irish and Terry's Irish background, and would head off on New Zealand sales trips to Australia, "with Terry leading the gang", she says. When Ernie died and she took over at Hunter's "he was fabulous to me", she adds. "He prodded me into doing things I didn't want to do. He talked me into giving speeches and getting on other committees." He was "always there" for her and many others, with "lots of words of wisdom", Jane says, adding wryly that she certainly didn't take them all on, "but it was good to have another view".

In 1993 Terry called to tell her he had a "fabulous" name for sparkling wine, but no one was interested. When Jane realised the name - Mirumiru - meant bubble in Māori, she loved it and trademarked it, but has always considered it "Terry's little baby", she says. "Between Tony Jordan who did the wine and Terry who came up with the name, really it's a brand on its own for us. It's been fabulous."

Tony Laithwaite of Laithwaites Wines and The Sunday Times Wine Club, says New Zealand owes a lot to Terry. "No other wine country had anyone with that ability to convince you that you were the most important person he knew."

"The imprint of Terry Dunleavy is all across the modern New Zealand Wine industry," adds New Zealand Winegrowers Chief Executive Philip Gregan. "He was a driving force in getting New Zealand wine exposed in international markets and developing the reputation that is at the core of our success."

More than any other single person, Frank Yukich changed our sector to the internationally respected force it is today.