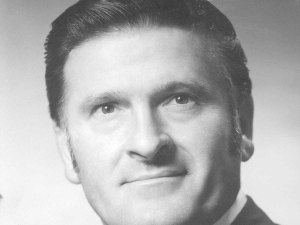 More than any other single person, Frank Yukich changed our sector to the internationally respected force it is today.

I owe a special debt to Frank, who brought me into the sector in 1971 as National Sales Manager for Montana Wines Ltd. I believe he was the single greatest influence in changing our wine sector from producing mainly fortified wines, average table wines made from hybrid grapes, and sparklers - mainly carbonated - to what we have today; a world-renowned wine country famous for its varietal light wines from classical vinifera varieties and bottle fermented sparklings that compare well with Champagne.

Frank was a prime example of what I have come to term simple single-mindedness. In Frank’s case that was building Montana Wines Ltd into not just the largest winemaking enterprise in New Zealand, but leading the sector into the international export market.

Among Frank’s special talents was a quick eye for products that would appeal to drinkers, and equal speed in backing his own judgement to launch those new products into the market. The success of Australia’s Barossa Pearl white sparkler led to him producing Montana Pearl, which became a big seller.

Then in 1971, Devon Hern, of New Zealand Wines & Spirits Ltd, returned from a trip to California with news of a new sparkling red style called Cold Duck. Within a month, Frank had Montana Cold Duck on the domestic market. By 1972, with me as recipient of phoned monthly orders from our South Island master distributor in Christchurch, there would be orders of 50 cases of this, 100 cases of that. But for Cold Duck there were orders per 1000-case container.

Another of Frank’s talents was his love of numbers. In those days before electronic calculators, it was not unusual for him to be found with two lever-operated adding machines, checking case movements and sales revenue to reassure himself that the company was meeting its growth targets.

He was willing to listen to anyone with an idea that might benefit Montana in particular, or the wine sector in general. He was fond of saying, “if two of us always agree on everything, one of us is superfluous and I’m not about to resign”.

Overriding all these talents was an awesome confidence in his ability to realise his own high expectations and to enthuse those of us around to pursue opportunity and achievement. The Montana of that time not only became the sector’s leader in production and sales terms, but was an innovator also.

For those of us who were with him in the whirlwind days of the 1970s, he was an unforgettably dynamic genius.

Terry Dunleavy (MBE) was inaugural CEO of the Wine Institute of New Zealand.