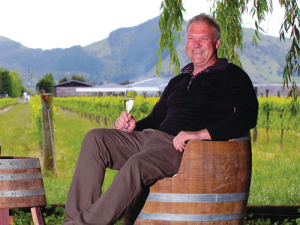 It could be argued that the quality of New Zealand Chardonnay has never been better, even if consumers are confused, says Gisborne winemaker Steve Voysey.

Chardonnay is arguably the world’s most popular white wine so why are consumers more confused than ever before about how to find the style they want to drink?

Peaches and cream or gunflint and the dreaded ‘m’ word - minerality?

Chardonnay has never been more polarising nor more diverse than it is today, so it could be suggested that wine consumers are spoilt for choice.

Instead, many winemakers, retailers and wine drinkers say that Chardonnay has become something of a confusing wine, due to the diversity of styles now made.

A wider range of winemaking methods are now used globally for Chardonnay production than at any other time in its history. These include when to harvest, how the grapes are pressed, choice of fermentation vessels, choice of yeasts, temperature of fermentation, use and degree of malolactic fermentation, lees aging, battonage (aka lees stirring) and maturation time with or without oak or other oak influences, such as wood chips.

Chardonnay has been on a roll since the 1980s when global plantings quadrupled everywhere from France and North America to Australia and here in New Zealand, where it was the most planted grape for several years in the early 1990s before being eclipsed for the foreseeable by Sauvignon Blanc.

Today, there is significantly less Chardonnay grown and made in New Zealand than there was a decade ago. It remains the third most planted grape overall in this country, but it has shrunk in number and percentage share of the national vineyard from 3,881 hectares nationally in 2008 to 3,203 hectares today.

Figures quoted are the latest from New Zealand Winegrowers. And the numbers pale in comparison to the growth in Sauvignon Blanc and  Pinot Noir.

It could be argued, however, that the quality of New Zealand Chardonnay has never been better, even if consumers are confused, says Gisborne winemaker Steve Voysey, who moved from Marlborough to Gisborne in 1990 specifically to make Chardonnay.

Today, Voysey works for Indevin and makes his own Spade Oak wines, but for many years he was in charge of making Montana Gisborne Chardonnay, a wine he describes as being “like a Chablis style but with fruit”.

“Montana Gisborne Chardonnay went from one success to another, due to having lots of easy to taste fruit but with oak in the background rather than being too upfront. I see this as a style of Chardonnay that New Zealand does extremely well. It would be nice to see more of those styles on shop shelves again. It hits the sweet spot of peaches and cream without oak being too dominant.”

For Voysey, the winemaking bells and whistles are imperative to Chardonnay which, he says, has as many thiols as Sauvignon Blanc; something which becomes apparent if the wine is made like Sauvignon Blanc – with its fruit pronounced rather than subdued.

For this reason, he works hard to make full bodied, creamy Chardonnays where both fruit and oak take the passenger seat rather than the driving role.

He sees huge growth in terms of sales of big buttery Chardonnays.

“The passionate consumer seems to yearn for that golden creamy expression of Chardonnay; they don’t mind the oak, the colour and the richness and I guess the more traditional Burgundian style with its gunflint character is more of a statement wine. This style is getting a good following in the wine show fraternity but I’m not sure whether the consumer is enjoying it as much as some people in the industry are.”

One of those in the industry who enjoys a more subdued Chardonnay with gunflint-like aromas is wine writer John Saker, who sees the exploration into different styles of Chardonnay as something to welcome.

“I think overall that there is a leaning to a tighter style of Chardonnay among winemakers, and I would have thought this is because these are more refreshing and better food wines than some big buttery Chardonnays. It also helps temper the sweetness, which is something that I’m quite sensitive to,” says Saker, who suggests that tighter, flintier styles of Chardonnay are more food-friendly.

Voysey says these wines are a harder sell.

“We find consumers are asking us for that creamier, peaches and cream style and the more refined, acid driven wines are more likely to generate that more mineral, gun flinty character. To my mind, it’s something that the Australians have changed their style to and New Zealanders have followed suit through the show system. It’s not a consumer-driven trend, it’s a show driven trend.”

“That was because we had no Sauvignon at one time,” chuckles Babich; the family owned company’s former chief winemaker.

“Once we moved down to Marlborough, the growth in Sauvignon Blanc was meteoric, but prior to that Chardonnay was important for us and for more reasons than numbers.”

Babich pioneered one of New Zealand’s first Burgundian-inspired Chardonnays when he made the first vintage of Babich Hawke’s Bay Irongate in 1985, five years after the company’s first ever Chardonnay, made from Gisborne grapes.

The inspiration for Irongate Chardonnay came from a trip that Babich made to Burgundy.

“I was intrigued by the way they made their wines differently to how we were making them. We followed what could loosely be called the Australian system from so many of our winemakers being trained at Roseworthy.

So when the opportunity arose to buy Chardonnay grapes from a Gimblett Road vineyard in the early 1980s, Babich leapt at the chance and made a 100 percent barrel fermented style in new oak and with batonnage; lees stirring. Initially the wine was made in 500 litre puncheons with inoculated yeasts from machine harvested grapes.

These days, natural yeasts are used for a portion of the fermentation and the barrels have been downsized to barriques and stored in a temperature controlled room. The pH of the wine has dropped as the vines have grown older and the wine tends to have between 10 and 20 per cent malolactic fermentation. Another change is from mechanic to hand harvesting and whole bunch pressing. Aside from that, the vineyard source is still the same and is still predominantly the Mendoza clone.

In terms of the direction of Chardonnay in New Zealand today, Babich finds many of the most highly awarded wines to be overtly oaky.

“I find many show winning Chardonnays today to be too exaggerated in style. I like the subtle, fine styles of wine and we want to create wines with a nice palate feel in the mouth rather than wines to stand out and win a gold medal.

“I don’t like the gunflint character in Chardonnay and we would never go down that path to high solids, reductive winemaking, which we see as a negative, not a positive. I don’t think it’s a mistake but the consumer is the final arbitrator and if they don’t like it, they won’t buy it.

Today, Babich branded Chardonnay represents about four percent of the company’s production while Pinot Noir branded is about nine percent and Sauvignon Blanc is nearly 75 percent.

As for the future, Voysey says that immediacy is key.

“The whole wine industry is about immediate value because wine consumers are generally buying wine to drink now and they want an impactful experience rather than having to learn too much and get into the whole story that we like to think wine is all about.”