The circle of death - Phylloxera strikes in Martinborough 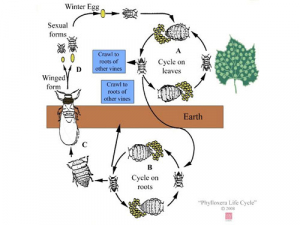 It looks like a circle of death because the vines within it wither with dehydration, experience reduced growth and increased disease resistance.

“It seems to move across in a certain blob type of pattern and the vines eventually die,” says Martinborough winemaker Joel Watson, who had to remove a block of affected grapes last year.

He is talking about phylloxera, which is usually invisible to the naked eye because it lives underground where it wreaks devastation on the roots of ungrafted grapevines.

It’s the ever present fear of every vineyard owner with ungrafted vines. It is also prevalent in regions with relatively old vines in New Zealand because grafted vines have not always been in plentiful supply.

The latest region to experience a loss of aged vines is Martinborough. Two vineyards there were ripped out last year, due to phylloxera. Both were planted in Riesling – the unsung white hero grape of this small wine region.

The first vineyard was at Vynfields, which has already pulled up over a hectare of old Riesling vines. Grapes from this vineyard were destined for two varietal Vynfields Rieslings – a classic and a dry – and also for Bliss; a relatively low alcohol style bubbly based entirely on Riesling.

The second vineyard was at Murdoch James. It was also planted in Riesling.

“It’s not surprising that the vines at Murdoch James’ old vineyard had phylloxera because this was a 36-year-old vineyard growing on its own roots,” says Joel Watson, winemaker at Luna Estate (the new incarnation of Murdoch James) in Martinborough.

Watson has worked there since 2015 but the winery has only just formed as one entity called Luna Estate; an amalgamation of Alana Estate and Murdoch James. (See story on page 58.)

The new Luna Estate is focussing almost solely on Pinot Noir, which will make up 85 percent of its vineyards and about the same in terms of production. Whites remain important to the new wine brand but Riesling is potentially the smallest of them, in quantity terms. It is currently available only at Luna Estate cellar door and restaurant and available in small quantities to specialist retail or trade customers.

Watson says that the Riesling vineyard which was uprooted will need to be replaced, but quantities of this varietal will remain relatively small.

The fate of the Vynfields vineyard and whether it will be replaced both remain to be seen.

There is another vulnerable vineyard at the old Murdoch James site, but, fortunately, it is on a site that is relatively removed from other vineyards. It’s a one hectare block of Abel clone Pinot Noir, which is the most prized Pinot clone in the region and which, Watson hopes, will remain unaffected.