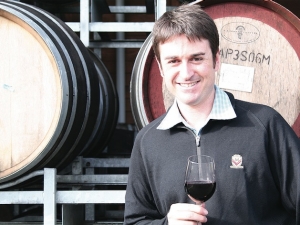 “I truly believe that 2013 is the vintage that will firmly put Hawke’s Bay on the international map and am confident that these wines can go up against Bordeaux wines worth much more and come out looking very good,” says Nick Picone, senior Auckland winemaker for Villa Maria.

The wines he refers to are the full bodied reds from Hawke’s Bay’s 2013 vintage; a year that is widely being hailed as the best or one of the best in modern New Zealand wine history.

The summer weather in 2013 was warm, dry and relatively rain-free. The season was long. Disease risk was minimal to non-existent in many parts of the Bay.

As we talk about these factors, Picone pours Hawke’s Bay barrel components of Merlot, Cabernet Sauvignon, Syrah and Malbec from the 2013 vintage into our tasting glasses. It is May this year when we taste, so these wines are all but finished. They are extremely deep in colour, extremely high in tannin and extremely ripe in flavour; all signs of a potentially long life ahead.

Picone says that the deep colour of 2013 reds was more uniform than in most vintages, especially compared with the challenging 2012 vintage reds, in which cool days and lack of sunshine stood in stark contrast to 2013 and 2014.

The samples we tasted for this story contained a maximum of 20% new oak and their alcohol levels were also moderate; all under 14% ABV. Both of these figures are lower than usual, says Picone.

It is the Merlot that surprises most with its intense colour, flavour and tannins. Picone describes it as classic. He is not alone.

“Poor old Merlot. I think it is very underestimated, both in terms of its potential quality and in how hard it is to make well. We talk a lot in New Zealand about how hard it is to make great Pinot Noir, but I think it is just as hard to create great Merlot. There are few people doing it well outside of Bordeaux; good value Merlot comes from Chile and some good wines from Washington. And Merlot is one of Hawke’s Bay’s great strengths.”

These wines and Picone’s words call to mind the 2013 barrel components for another top red Hawke’s Bay wine from 2013; Craggy Range Sophia.

Craggy Range general manager and Master of Wine Steve Smith has been doing an international tasting tour this year of component wines from 2013, showing Merlot, Cabernet Franc, Cabernet Sauvignon and Petit Verdot to trade and media in the UK and US as well as in this country.

“There have been a lot of aha moments at these tastings of these component wines,” says Smith. “Whichever way you look at it, 2013 and 2014 are both great years, but I am strongly of the view that ‘13 is a better vintage because the heat between flowering and veraison was really warm, whereas it was cool in 2014 until the end of January and then pretty warm around veraison into March. The 2013’s are going to be very classic wines whereas the 2014 vintage has given us very open, forward, delicious wines – I think they’ll be glamour wines but the ‘13s are classics.”

Classic or glamour, two years with such strong heat summation signal a reversal of fortune for Hawke’s Bay, whose winemakers struggled with ripeness levels in the cool 2012 vintage.

The numbers stack up for the past two vintages in more ways than one. While flavours in the 2013 vintage reds from the Bay are extremely ripe, the alcohol levels remain moderate with Craggy Range Sophia finishing at 13.6% ABV, which Smith attributes to vine age as well as a long, dry vintage.

In the summer of 2013, Hawke’s Bay was officially in drought.

“This wine (Sophia) and others we are working with are made from vines that are now 15 years old. That’s giving the vines – and us - the ability to show different characters than they did in their youth.

“And since we planted those vines ourselves, we are now watching the fruit of our labours translate in riper grapes at lower sugar levels than many winemakers have ever seen before in New Zealand,” says Smith.

Picone says the moderate alcohol levels can also be attributed to the high diurnal range during the 2013 summer, which, combined with dry weather, enabled top vine health.

“These are not blockbuster wines because they don’t have high alcohol levels,” Picone says.

“Instead, there’s an incredible purity and fineness of flavour without high alcohol. The cool nights lengthened the vintage and the ripening, so 2013 wines will age well because the components are so well balanced,” he adds.

It was a similar story in North Canterbury. Ataahua winemaker Stephanie Henderson, who is working with vines that she planted herself in the early 1990s, says that 2013 was a long season with cool nights, a dry finish to the season, minimal disease pressure and intense tannins and colour.

“We had cool nights and a dry vintage, so there was no pressure to bring grapes in earlier than scheduled in 2013, which made it an ideal harvest. Sometimes we get so much heat over summer that the acids tend to drop but in 2013 we had such a long season with cool nights that we got intense colour and lots of tannins in the Pinot Noir.”

It was a season in which minimal sprays were used, due to the dry weather, says Henderson, who uses her grapes to produce her relatively new Ataahua wines; first made from the 2008 vintage.

For many winemakers in both islands, vineyard maturity is a key to rising quality, says Smith.

“Over the past year I have heard time and again from winemakers all over the country that they are getting maturity coming through in the vines which is translating lower alcohol levels with ripeness that we just wouldn’t have seen in the past.”

There is at least one more reason for high quality wines of 2013; low cropping.

The vines were naturally in a low cropping mode after 2012, says Smith.

“They weren’t overly vigorous because in a cool year they don’t put down a lot of stored energy, so that’s another reason why 2013 has been so good.”

So there was a silver lining to the cool 2012 vintage after all.

This email address is being protected from spambots. You need JavaScript enabled to view it.ν

* While most of the 2013 reds have yet to pour out of wineries, the trickle of wine that is already on the market proves these numbers with their moderate alcohol levels, intense colour, ripe tannins and flavours.