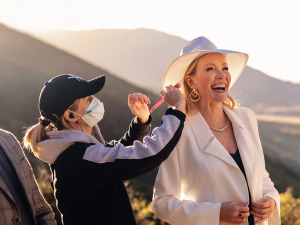 Three months of filming for romantic comedy Under the Vines, set in the Central Otago's wine region, wrapped up in April.

Despite neither having ever done a hard days' work in their lives, and both despising the other, they must somehow make the vineyard successful so they can sell up, split up, and get out of there.

"I'm a sucker for romantic comedies and the scripts are wonderful - there is so much humour and heart," says Rebecca.

Filming began in February, and Acorn TV has all rights worldwide with the exception of Television New Zealand (TVNZ).