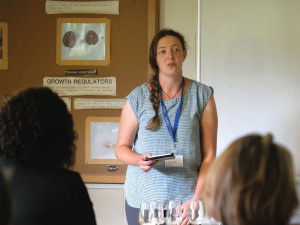 These became central to assessing the suitability of Canterbury for viticulture and were joined 25 years later by a winery on site. Together these went on to underpin the university's research and teaching, and were celebrated at November's Anniversary Vine to Wine Symposium.

Guests gathered to reflect on the pioneering wine days at Australasia's oldest land-based university, and current academics presented research seeking to tackle contemporary and future challenges, from the effects of climate change to context on the wine drinking experience.

Graeme Steans, who worked with David and managed Lincoln's research winery before retiring in 2005, recounted his early trial cultivar plantings. These included varieties successful today, such as Pinot Noir, Pinot Gris and Sauvignon Blanc. However, he says "there was very little enthusiasm for Sauvignon Blanc" at the judging panels instigated by Danny Schuster, who joined them at Lincoln. "I believe Canterbury is the only place in the southern hemisphere where the evaluation of cultivars for the climate was conducted before the region got established," Graeme observed. "David did something that was quite unique."

Today, five rows of those 50-year-old vines remain. The same cannot be said of the first vineyard planted by Pegasus Bay's Ivan Donaldson. The windswept slope in Halswell, where he learned winemaking from Danny, is now real estate. Speaking of his experience as an early winegrower in Canterbury, Ivan credits Danny and David's book, The Production of Grapes and Wine in Cool Climates, as becoming a "bible" for Canterbury's fledging wine industry.

Over the years, Lincoln's wine programme has expanded. In 1991 David Heatherbell, the first person in New Zealand to complete a biochemistry degree, established its first oenology programme. Mike Trought also came on board, stressing the need for "good science, building an international reputation, and good students". This saw him establish a more science-focussed conference, featuring international speakers, and taking New Zealand Sauvignon Blanc to UC Davis in 1994, where it was dismissed as being too herbaceous. "So don't believe the experts," he quipped at the symposium.

Speaking as both a Lincoln alumna and a current Principal Research Officer, Wendy Parr praised the integration in research that had occurred between scientists, industry and New Zealand Winegrowers (NZW). This was something reflected in the symposium's line-up of speakers which included members of NZW and an industry panel, as well as Lincoln academics presenting snapshots of their current research.

Climate change emerged as a hot topic in contemporary viticulture studies. "What will we be growing at Lincoln in 50 years' time?" asked Amber Parker, the university's Director of the Centre for Viticulture and Oenology. An international study in which she's been involved suggests that while some wine regions will no longer be suitable for early ripening varieties, such as Pinot Noir and Sauvignon Blanc, new regions will open up for these, meaning there will still be an increase in potentially suitable areas. For Merlot and Grenache there's even the possibility of increasing production under the climate change scenarios explored.

Recent years have seen wildfires become more destructive. As noted by Tim Curran of Lincoln's Department of Pest-Management and Conservation, days with very high or extreme forest fire risk are predicted to increase by 71 percent by 2040, encompassing a number of the country's wine regions. As plants can be fuel or fire breaks, Tim's lab has been investigating grapevine flammability, with preliminary data suggesting cool climate varieties, such as Pinot Noir (which proved inflammable), have particularly low flammability and so might have a role to play in managing this issue.

In oenology, Senior Lecturer Bin Tian presented the project he's been conducting with Greystone, which sought to promote a better expression of terroir through fermenting grapes in the actual vineyard they came from. Comparisons between the winery and vineyard fermented wines revealed different combinations of yeast strains. Tian has also been investigating whole bunch fermentation with Pegasus Bay, with preliminary data indicating that while whole bunch or stems enhance colour concentration and tannins, higher percentages also increase methoxpyrazines.

A relatively recent recruit to Lincoln, Senior Lecturer Damir Torrico has been using virtual and augmented reality technology in his investigations of the effects of context on the wine drinking experience. Such simulated environments might enable easier and less costly measurement of context effects, with findings already indicating comparatively less emotions are experienced in the sensory booths used for much sensory evaluation. He is also using eye tracking technology to investigate what people pay attention to on wine labels.

Lincoln's programmes have spawned numerous prestigious alumni, a number of which returned to talk of their university experience, and subsequent achievements. Felton Road's Blair Walter was one of these, graduating 30 years ago from what was then a Horticultural Science degree. His third year saw him participate in the university's Oregon exchange, where vineyard visits and participation in a Pinot Noir sensory evaluation programme ignited his interest in wine. More recent graduate speakers already starting to make their mark included Cloudy Bay Assistant Winemaker Kelly Stuart, Pegasus Bay Assistant Viticulturist Zoe Marychurch, and Will Bowman, who runs his own Vita label and is Assistant Winemaker at Black Estate.

Fittingly, the day ended with delegates gathering for a meal in the David Jackson vineyard, where memories were shared, and plans for new research plotted.