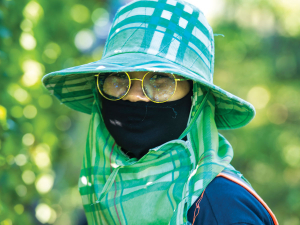 Two years on, I find her pruning in Renwick on a fresh spring morning, part of a Recognised Seasonal Employer (RSE) scheme workforce who've stayed in the country while borders are closed.

Kwanruean, who has worked 10 seasons with Alapa Viticultural Services in Marlborough, says she is grateful for the work in New Zealand, allowing her to send money to her family in Thailand. And while 12 of the 70 Alapa workers from Thailand have decided to travel home in October, Kwanruean will stay as long as she can.

Alapa owner Alan Wilkinson says it's been a stressful season for contractors, struggling with less labour and more rain days this winter. And it has been tough for some of the long-stay RSE workers he employs from Thailand, Samoa and Papua New Guinea, he says, noting that there have been many more days off than a normal season. "That is understandable", he says. "They have been working a long time." Alan says many of the RSE workers are content to stay and work in New Zealand, "because things aren't easy in Thailand, with Covid there and lack of employment". But he undersands why some have decided to go home, many of whom have kids waiting for them.

Alan is grateful that a one-way RSE bubble announced by the Government means he will be able to bring in new workers from Samoa for the upcoming summer season. The Government confirmed in September that quarantine free travel (QFT) for RSE workers from Samoa, Tonga and Vanuatu would start in October. The announcement was welcomed by New Zealand Winegrowers (NZW), with Chief Executive Philip Gregan saying it would provide certainty for growers. "Confirmation of QFT travel for RSE workers is a significant boost for our sector," he says. "Labour supply has been very tight over the winter pruning season. The start of QFT will help to provide more security of labour as we start the growing season."

A scheme allowing Pacific workers short-term work on New Zealand orchards and farms is under fire from a human rights lawyer.

On your behalf: RSE scheme is here to stay

At the recent RSE Conference in Nelson, the Minister of Immigration, Kris Faafoi, repeated the Government’s commitment to the scheme, and recognised the important role thousands of Pacific Island workers play across the vital seasonal tasks for the horticulture and wine industries.

The Recognised Seasonal Employer scheme faces three strategic risk areas, according to a two year study assessing the impacts of the migration programme.