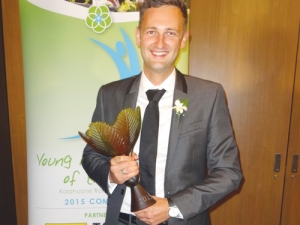 Caleb Dennis has taken out the title of New Zealand Young Horticulturist of the Year.

Each of the contestants had to submit a Business Plans for a new product they would like to develop and launch. Dennis's plan involved launching a wine cellaring app that he is hopeful will eventuate into reality in the not too distant future.

Once they had presented those plans, the contestants were involved in a variety of interviews, covering topics such as a focus on sustainability, HR, plant disease and pruning. They also had to deliver a speech at the Grand Final dinner.

While preparing for the finals was months of hard work, Dennis not only takes home the title of Young Horticulturist of the Year, but an amazing prize package which included $7500 travel package and $1000 ICL Specialty fertilisers. He also won $3500 travel scholarship for winning the T & G Practical Activity Award and $2500 scholarship for the Fruitfed Supplies Leadership Award. Combined with the NZSVO travel sponsorship he won from the Bayer Young Viticulturist of the Year, he is looking at heading to California and Bordeaux next year, to learn about the various viticultural practices and challenges in those regions.