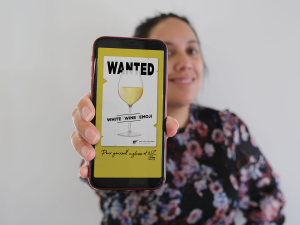 If a picture is worth 1,000 words, what's the significance of an emoji?

In this modern world, everyone has such a short attention span that when you're scrolling through social media, no one tends to sit down and read a bunch of text when you can get your message across with just a couple of emojis. Emojis are meant to be fun and lighthearted and convey a broad range of emotions or messages efficiently and in a way that words sometimes cannot. So, having a white wine emoji can help us communicate our New Zealand white wine message more effectively and efficiently in a time poor world.

How long have you been focussed on a white wine emoji?

Who gets to decide?

The Unicode Consortium gets to make the decisions around emoji submissions and what is approved and declined each year. The consortium is a non-profit corporation devoted to developing, maintaining, and promoting software internationalisation standards and data, and are tasked at protecting the global keyboard. They're the emoji bosses!

Has it been requested before?

From my understanding a winery in the United States has made a submission previously. We are not told why their application failed, but the Unicode Consortium have a specific set of selection factors such as usage level, distinctiveness, and whether the proposed emoji fills a gap in existing types of emoji.

Why is now the right time?

The rise in use of technology during the pandemic has highlighted that the white wine emoji has been missing from our digital keyboards since the creation of emojis in the late 1990s. The red wine emoji is a highly present and frequently used icon on every smartphone in the world and it has been a way for the global wine industry to promote the red part of their production and products, but how do we convey our white wine stories? With our top three wine exports celebrated in May, it was the perfect time to campaign for the white wine emoji while highlighting New Zealand white wine.

Emojis that have been declined within the last two years are not eligible for re-review and the last submission for a white wine emoji was made in 2019, so now we are able to make a submission again.

Tell us about the petition and industry support

Finally, what’s the perfect use of a white wine emoji?

There are so many examples!

But one I’d definitely use is:  ❤ NZ <white wine emoji>