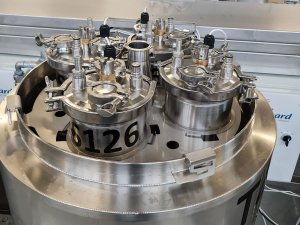 It will take generational change for some wineries to truly tap into technological advancements, says VinWizard veteran and new co-owner Bob Richards.

But in the meantime, other winemakers around the world are able to control their ferments via their phone or tablet, assess the impacts of other treatments, and grow energy efficiency across the operations, he says.

VinWizard’s winery automation technology is the brainchild of New Zealand-based Wine Technology Marlborough, which was last month sold to United States company Wine Technology Inc, based in Sonoma County. New co-owner and Chief Executive Kelly Graves, who will work with Bob to continue the commercialisation and expansion of VinWizard’s “global footprint”, says the technology is “unrivalled” from a capability, cost, and ease of use standpoint.

The company began in the late 1990s when founder David Gill, an electrician, was tasked with fixing failing components in a winery he was working for, “and he found there was very little there in terms of reliable gear”, says Bob. David looked nationally and internationally for wine-specific solutions and realised there was a major gap, so started putting together hardware, before teaching himself the code required to create software. “He has a brilliance for integrating software, mechanical, environmental and sensory components,” says Bob, who joined the company in 2004. “This is complemented by a deep understanding of winemaking and the winemaking environment.”

For the past 25 years, both hardware and software have been produced inhouse, allowing winemakers around the world to remotely view and control everything from pump-over and stirring to humidity, power usage, CO2 and water consumption. Bob says VinWizard has helped winemakers, brewers, and beverage producers in five continents to save time, energy, water, labour, and money, including Australia’s Yellow Tail, New Zealand’s Kim Crawford, and Chile’s Concha y Toro. David’s technology is assisting wine companies around the world, including many with ultra-premium wine, Bob says. “The volume and value of wine he is responsible for each year is phenomenal.”

VinWizard will now hold dual citizenship in New Zealand and the US, but operations will predominantly remain at the existing Renwick facility, says Bob. “Core to our ongoing business model is to maintain and grow our presence in the New Zealand and Australian market, as this is where it all began… We’ve established a loyal customer base and we will remain heavily invested in local markets.”

David will stay on to advance new VinWizard technologies, including the RedOx, level detection, and Brix probes being trialled at the Bragato Research Institute research winery, of which the company is a founding sponsor. VinWizard developed solutions for the research winery’s fleet of mobile tanks, specifically designed for the space, and installed a temperature, pump-over, and agitator control system, along with innovative software.

The company then went on to undertake three trials at the winery, including a differential pressure sensor to calculate specific gravity and brix, measuring the difference in pressure between two points in the tank. The second trial is an oxidation reduction potential sensor, to let winemakers know when oxygen levels are getting too low in a ferment. The final trial is an electrical conductivity sensor to determine the state of a ferment, providing online data about the ferment curve.

Bob says VinWizard’s “plug-and-play capability” will continue to forge partnerships with complementary technology providers with the aim of growing together. “Be it connecting to refrigeration plant, automated pump-over set-ups, or production software, VinWizard is extremely flexible and is intended to integrate, display, and control all critical aspects of a winery’s product.”