Business heats up after Icehouse 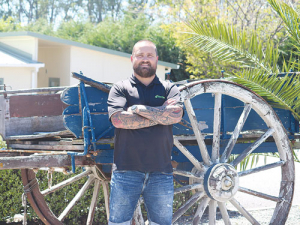 Aaron Jay didn’t think he was the sort of person who would benefit from an Icehouse programme. Now he is a staunch advocate of it.

When it was suggested to Aaron Jay, owner of Marlborough Vine Works that he undertake The Icehouse Owner Manager Programme, he scoffed. Now four years after completing the course, he is anything but skeptical.

Aaron had a single goal when he took over the company back in 2009 – a wish to make enough money to allow his wife to stay at home and look after their new born daughter. With one van, seven other part time staff members and some loppers and secateurs, he began building his vineyard contracting business. Within a month he had 109 staff and a few more vans to carry them around the province. In 2016 he had 42 permanent employees, almost 400 RSE workers throughout the 12-month period, and another 400 casual or transient workers. In the past five years his growth has been 410 percent. Phenomenal you might say and you would be right.

But it hasn’t always been an easy road he admits.

“For those first three or four years it was a case of head down and bum up. Trying to run a company which I wasn’t necessarily trained at doing, was like holding onto a tiger’s tail, making sure it didn’t turn around and bite me.”

While Aaron had experience in finance and banking, and sales and marketing from his earlier years in England, he admits there were issues he wasn’t prepared for.

“The biggest issue I had and wasn’t expecting because of my naivety and lack of experience, was cash flow. The fact that a growing business is extremely hungry, it eats up money like nothing else.

Yet when his bank manager at the BNZ suggested he could gain experience by undertaking The Icehouse Owner Manager Programme, Aaron admits he didn’t know what the guy was talking about. He didn’t think he was the sort of person that attended such courses.

“I hadn’t heard of it and I wasn’t interested. I thought it was all a bit too much for me - a boy from south England who had kind of fallen into this business. I put it off for the better part of a year.”

But he was finally worn down and agreed to take part in the programme, somewhat reluctantly. So up to Auckland he went, and decided within minutes of walking into the room, that this really wasn’t for him.

“I saw everybody else in the room and I was like; ‘man, I don’t want to be part of this. I’m not ready for it. I will never be able to talk to these people.’ So I sat down and thought I will stay until the first break.

“Then over the period of the first couple of hours, it started to dawn on me, that everybody else in the room was in the same boat as me, irrespective of age, stature or race.

“Everyone was an owner operator, having similar sorts of issues, whether it be business partners, money, growth or clients. So I stayed until lunchtime and then 12 months later I finished the programme.”

That entailed him travelling to Auckland every month for three days, where the only agenda was business and how to succeed in it as an owner/operator. While he describes those days as being “intense” he says the camaraderie of the group and their willingness to help was a total surprise.

“I couldn’t believe it; it blew my mind. I had 23 other people in my group who were highly intelligent, highly motivated people. But they were having or had had issues that I had and were now at different stages of their professional careers. And they were all willing to give advice and help in anything I needed.”

While the advice was something that Aaron believes has helped him develop his business, the confidence the course gave him was another important factor.

“It gave me the confidence to know I am the right guy to be running (the business) and make the decisions to do what we are doing.”

Interestingly, after undertaking the course, what had been Marlborough Vine Works underwent a major rebrand. The name was changed to Hortus Ltd, which in itself has been an important aspect of its recent growth. The rebrand came about when one of the external panelists asked him whether he was a vineyard contracting company or a labour supply company specializing in viticulture.

“I though, umm, good question. I went away and thought about that for the next few months and decided we were a labour supply company that specializes in viticulture.

“We were cutting ourselves short by calling ourselves Marlborough Vine Works. So we rebranded it to Hortus and that allowed us to grow into other sectors within viticulture and also within the horticulture industry.”

These days Hortus works in a variety of differing fields, including apples, kiwifruit, carrots, pine nuts, broccoli and lettuce.

“If we were called Marlborough Vine Works, it would be the end of the conversation, it wouldn’t work. No one would consider us for those jobs.”

Would the growth have come about regardless of him doing the course? Aaron says he doesn’t think so.

“I suspect not, definitely not as quickly as it has because at that point the business was stagnating and we weren’t sure where our future was and where we were going. It has been massive for me.”

He is also quick to recommend it to other owner/managers, especially if they are dreaming big.

“It gives you the confidence to believe in yourself. I mean if you show someone your business plan and they don’t laugh, then it’s not big enough.”