Corkscrews add a point of difference 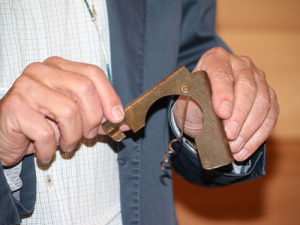 This corkscrew was patented in New Zealand back in 1945. Not the sturdiest or the most practical.

As New Zealand wineries were preparing for the first National Cellar Door Day, one Marlborough company was adding 700 corkscrews to its refurbished public space.

New Zealand and corkscrews? I know that may seem like an oxymoron, given close to 99 percent of this country’s wineries seal with a screw cap.

But FROMM Winery has always prided itself on being a little different, and cork to them is a major point of difference. All the red wines of FROMM are available under cork and they have no intention of changing that, says GM Stephan Walliser.

“Our philosophy is a little bit traditional of the old-world wine making with new world innovations,” he says. “The new world innovation is this beautiful soil we have here and the perfect climate to grow wine. The old world is winemaking techniques and the sealing with cork.”

While a New Zealand company, FROMM’s owners are Swiss. And it is one of those owners, Pol Lenzinger, who has provided 700 corkscrews to be displayed in the cellar door.

They are part of his much larger collection (more than 2000) that he has been amassing for more than 50 years. The oldest in the FROMM exhibit dates back to the late 1700s, while the very first corkscrew patented in New Zealand in 1945 is also on display.

The corkscrew story is a fascinating one, believe it or not. They were only invented once wine began to be sold in glass after 1728. Cork became the closure of choice some time later, and then the need to develop something that could remove that cork set up a frenzy of designs. And that frenzy continued, particularly into the late 1800s and early 1900s.

Lenzinger says the corkscrews provide an insight into the history of wine itself.

“In the beginning wine was something just for rich people, so the corkscrews in the beginning were almost seen as jewels. They were made from gold, silver, ivory, and were handmade to lay on the table to be shown off, Lenzinger says.

“When wine became more popular, then the corkscrews changed. They became more mechanic, and they became a mass-produced product.”

While you may think there are only a few different designs, think again. In total there are more than 2000 patents for such items, including one here in New Zealand. Lenzinger managed to track down the Australian owner of that 1945 corkscrew and convinced him to let it come home to rest – at the FROMM winery. Looking more like a number 8 wire invention, when compared with the others on display, it is a little part of New Zealand’s wine history unable to be viewed anywhere else.

The corkscrew collection is just part of the new look FROMM cellar door. Having opened up the space, there is now a private tasting room which also boasts videos of the history of cork and corkscrews, and provides views into both the winery and barrel hall.

To match the new look cellar door FROMM is offering a range of differing experiences for tourists. From tasting for beginners, through to private tastings with library wine, Walliser says the company is keen
to open the world of wine up to all those who are interested.

They may be a common sight in Europe, but having a Clydesdale horse spraying the vines is not something people expect to see here in New Zealand.

Dryland farming is not that easy for grape growers in New Zealand. But one company in Marlborough has had success, although it hasn’t been achieved overnight.