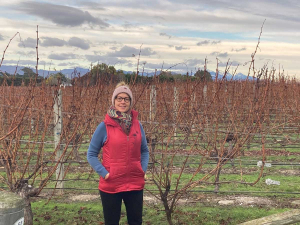 A bout of “dumpster diving” was one of the first priorities for a Marlborough Winery Waste group established in June 2018, says Bridget Ennals.

The group, which was formed under the SWNZ Continuous Improvement programme, began with around 10 company representatives interested in tackling winery waste. It now has between 20 and 30 companies involved, including some of the region’s largest wineries and key supply companies. Bringing them all together has revealed plenty of waste problems, but also found plenty of solutions, she says. “So many of the answers were already in the room.”

Bridget says the initiative was partly about celebrating companies and individuals going above and beyond the SWNZ benchmark, while coming up with an industry standard for winery waste, along with information on what and where waste can be recycled.

The group set grape marc aside, as that challenge was being studied widely. But group members were struck by the opportunity to improve disposal of grape lees and other winemaking byproducts typically sent off to landfill, says Bridget. “They were also very concerned by the packaging being used in their companies.” Over the past two years the team has come up with packaging solutions that reduce the waste stream, whether by ensuring recyclables, or avoiding packaging altogether.

One example is Fruitfed Supplies, which has made a tonne of changes in the past few years – or rather 13 tonnes, when it comes to plastic. Blair McLean, who has been on the winery waste group since it began, says convincing a New Zealand supplier of wire to send bales down without plastic and wraps saved around 5000kg of plastic. Changing the delivery of filtration aids from a major supplier, so they come in pallets with straps but no plastic wrap, has saved another 8000kg or so. He has also talked to other supply companies about joining the AgRecovery scheme, to ensure empty containers can be recycled.

Blair says the changes are driven by companies seeking zero waste, and Fruitfed’s push to reduce its footprint. “We can have a direct impact and want to work with our suppliers to get them to supply products smarter.” Being in the waste group has allowed him to learn more about what companies want, and to hear about new solutions. When WineWorks told the group about sending its shrink wrap to Nelson to be made into slip sheets, Blair talked Fruitfed into doing the same. He says the waste group has made excellent inroads, and he looks forward to seeing more major companies get on board to help drive it further, faster.

Bridget says the waste group has discussed everything from gumboots and other gear left behind by pruning workers, to pallets made from PET bottles, and paper bottles that could conceivably be used for wine. “Every day we have something new come along.”