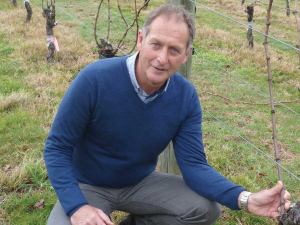 Could drought-tolerant (resistant) rootstocks play a role in the future of New Zealand viticulture? Judging by the number of enquiries on this topic in recent months, it certainly appears that vineyard managers are very curious.

Climate change will affect grape growing. The question is, how? One possibility is by more frequent droughts, but other scenarios include higher temperatures and higher rainfall in some parts of the season. While I don’t have any answers on climate change, it’s important to consider the pros and cons for the various rootstocks planted in New Zealand.

New Zealand has a short history when it comes to rootstocks. It wasn’t until the late 1980s and early 1990s, when phylloxera became widespread, that vineyards were planted using grapevine varieties grafted onto rootstocks. At the time, the focus was typically on early maturity and phylloxera resistance, although two rootstocks – ARG1 and 1202 – did not live up to their billing. Both of them were subsequently found to have insufficient resistance to phylloxera and needed to be removed and replanted. Some growers were faced with a second replant not long after they had replanted own-rooted vineyards – devastating on cashflow and a good reminder of the importance of “getting it right”.

Drought tolerance was not a consideration when choosing rootstocks in a country with a relatively high annual rainfall and abundant supplies of water. Prized rootstock attributes were early maturity, positive effects on fruitset and low to moderate vine vigour. Early maturity was considered important in a climate where late summer/early autumn rainfall often interrupted harvest in the North Island and cooler temperatures and/or frost in the South Island could make it difficult to achieve desired maturity before vines shut down.

Rootstocks appear to influence fruitset, although whether this effect is related to vine vigour, timing of flowering or the rootstocks’ influence on nutrient uptake is not clear. These attributes are still very important in New Zealand, but will they become more – or less – important with climate change? And will drought tolerance become more important than other attributes? Helpful data on the performance of rootstocks in New Zealand is scarce or non-existent but, although the international literature provides useful information, we should be cautious in applying it to New Zealand’s climate, soils, and production targets.

Look to the parents

Are there drought-tolerant rootstocks that are suitably resistant to phylloxera with low to moderate vigour, good fruitset, and early maturity that could be used in New Zealand? That’s a tall order. Any attempt to answer those questions should start with an examination of rootstock parentage, because progeny from the same crosses generally exhibit similar traits. The rootstocks available today are crosses or hybrids from the native Vitis species of America where they survived and flourished in the presence of phylloxera. The key parents are Vitis riparia, Vitis rupestris, and Vitis berlandieri of which most of the commonly used rootstocks are progeny of two of these. The three main groups are:

Vitis vinifera has also been used as one of the parents, but crosses of Vitis rupestris with Vitis vinifera were found to have insufficient resistance to phylloxera. Rootstocks 1202 and ARG 1 fall into this category. In some cases, a second cross is made using one of the progenies from these three major groups crossed with Vitis solinis (1616) or Vitis cordifolia (44-53 and 106-8), or Vitis vinifera (41B and 333).

In broad terms, the international literature tells us the following:

Our experience in New Zealand generally supports these broad categories. Without replicated trials across New Zealand’s regions, varieties, and soil types, however, we have no measurements of the magnitude of these differences. Other traits have contributed to the popularity of particular rootstocks, including:

• Tolerance to lime or high pH

• Tolerance to salt or soils high in sodium

• Influence on flowering and fruitset

In some cases, these traits may be more important than drought tolerance. For example, a vigorous rootstock that increases management costs in normal years (shoot thinning, positioning, trimming, and leaf removal) and has poor fruitset and lower yield could be an economic disaster in most seasons, with costs exceeding any benefit gained in a drought year.

There may be rootstocks that are suited to New Zealand, with similar performance to our current stocks and less requirement for water. Malegue 44-53 and Millardet 106-8 are two possibilities that have been propagated and planted by some Kiwi growers with water saving in mind. Just how
much water can be saved
using these stocks is not clear. Gravesac (V. riparia X V. rupestris X V. berlandieri) may be another rootstock with potential for low water requirement. Unfortunately, there is often conflicting information reported in the international literature. Again, suitable trials conducted in this country would give us some measurements of the drought tolerance and overall performance of these rootstocks.

In New Zealand, we are overdue for a reassessment of rootstock performance, as the goalposts have shifted in recent years. High and consistent yields are necessary if vineyards are to remain profitable in the face of increased costs. This is particularly the case for Sauvignon Blanc but also increasingly for other varieties and wine styles including Rosé, bubbles, and low alcohol wines, all harvested at lower Brix. The choice of rootstock might help growers to achieve desired outcomes and profitability for these wine styles.

The industry has become particularly reliant on a single rootstock, 3309, and increasing the diversity of rootstocks may be timely for a range of reasons. Many companies are reducing reliance on herbicides, and rootstocks with deeper root systems and more vigour may counteract increased undervine competition. For now, we continue to have many questions about alternative rootstocks, but little in the way of solid, up-to-date information gained from New Zealand trials.

• Nick Hoskins has been the Viticulturist at Riversun Nursery for more than 20 years, consulting with clients on vineyard planting, clones, rootstocks, vine health, and just about anything else they require in terms of vineyard advice.