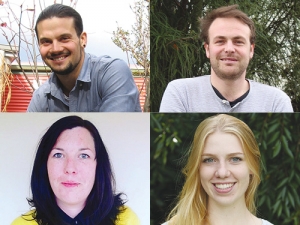 The Scholarships are awarded annually to one student from EIT, two from NMIT and one from Lincoln University.

In terms of EIT in the Hawke's Bay, the winner is upholding a long family tradition in pursuing a passion for wine.

Twenty-five year old Jascha Oldham-Selak is related to Marino Selak who founded the New Zealand wine company of the same name. Marino Selak was Jascha's second cousin on his mother's side. His great grandfather helped invest in the land where Marino established the wine business.

In his second year at EIT Jascha will also work in the company's vineyards during study breaks, helping to meet the qualification's requirement for hands-on industry experience.

Although he finished his airline pilot qualifications, he is happy studying grape growing and winemaking.

"This has more meaning to me," he says. "My background supports it."

There were two scholarship winners at the Nelson Marlborough Institute of Technology.

Ari Fratucelli, who is 27-years-old is in his first year of a three year Degree in Viticulture and Oenology. The Waiheke born student also comes into the course with a background. His uncle in Germany is a wine merchant and it was him that convinced Ari he should consider the world of wine sales as a future career. No need for any further encouragement. When Ari returned from Europe he enrolled in the degree prgoramme, based in Marlborough. Although his long-term goal is to be involved in sales, he believes having the viticultural and winemaking knowledge the course provides, will certainly help in his career.

Winning the scholarship came as a huge surprise to him, he says, especially since he knew he was up against five other talented applicants.

"I very nearly chickened out of going to the interview. I hold the other applicants in very high regard, so I never thought I had a chance to winning."

Claire O'Rourke won a Constellation Wines Business Scholarship – aimed at students who are enrolled on NMIT's Year Two of the Bachelor of Commerce majoring in Marketing or Management. Despite leaving school at the age of 16, the 30-year-old Claire has been thriving during the business course. She says having worked in all fields of the hospitality/food industry since leaving school, she is now keen take her knowledge into the field of consulting.

"In the restaurant and services world, for companies who want to become ecologically friendly and maybe take a more modern holistic approach. I would like to be able to look at staff training and how that relates to productivity as well as implementing a green ethos across the board."

Katie Cameron is the winner of the Lincoln University Constellation Wines Scholarship. The 20-year-old is following her love of horticulture with a Degree in Viticulture and Oenology. Studying both sides of the wine industry has her scratching her head about which path she will travel.

"To be honest I just don't know at this stage. I have been talking to lots of very good winemakers, so I am encouraged by them. But I realise that it is very hard to get up to that level. So at this stage I intend working along both lines with an open mind to where it will lead me."

As with all the scholarship winners, Katie has been offered a holiday job with Constellation Wines in the future, which she is looking forward to. The money she has received will go towards paying off course fees.