Point of View: The world's most southerly Cabernet Franc 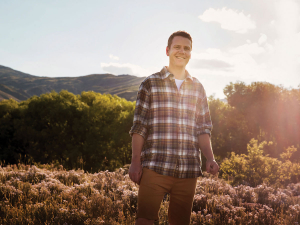 Whenever I hear the words “alternative varieties” in relation to wine, I feel a funny mixture of emotions.

The part of me that loves adventure, searches out new experiences, and generally likes to push boundaries gets this little tingle, and I find myself itching to taste that Adelaide Hills Fiano and add another card to the rolodex of wines I carry in the back of my mind.

Then the cynical, cranky part of me kicks in. The one that says, “what are these winemakers trying to achieve here?” Are they trying to cut through the chatter of an increasingly crowded wine market with a statement so loud that nobody can ignore it? Are they trying to get onto a wine list which already has 32 wines by the glass? Or are they just so bad at making wine that they need one with zero frame of reference – where nobody can benchmark it against another in its class, because there is no other in its class?

The fair part tells me to give every wine a fair go – to judge on its merits, rather than its pedigree. After all, in 1970 Sauvignon Blanc was considered an ‘alternative variety’ in Marlborough, and many people believed that wine grapes should not be grown in the South Island at all. The nature of new ideas is that they start on the fringe and move towards the centre, only to be replaced on the fringes by other new ideas. Who am I to stand in the way of progress?

All of these voices were clamouring at once on the day we harvested our first Cabernet Franc grapes – the very last day of harvest 2021. Three years earlier, I had been standing on that same vineyard block, sweating in 40-degree heat, and thinking to myself – this site will never grow great Pinot Noir. The year was 2018, and we were in the middle of an exceptionally hot season. Planting had begun in earnest at our Northburn vineyard, and we were sculpting 40 hectares of raw, barren Central Otago hillside into one of the region’s most promising vineyards.

It was work, but this one particular tiny block was proving exceptionally vexatious. It had the hallmarks of greatness – a frost-free north-facing slope, it promised plenty of heat accumulation to ripen in even the most precocious season. Glacial soils guaranteed the vine roots would be able to explore the terroir, hitting the layers of wind-blown loess and paedogenic lime we had discovered during earlier soil surveys. And crucially, the block was protected from the wind. Tucked down into a gully and surrounded by schist outcrops, this would be one of the few blocks at Northburn which was not being pummelled by a persistent northerly.

I had spent the last 12 months visualising the ripe, black bunches of Pinot Noir that would be coaxed from this soil, and the depth of black cherry and plum that would come from such a lucky site. But 2018 changed all that. Too much heat during the growing season causes Pinot Noir to lose itself. The delicacy and poise, the subtlety – all of this turns to jammy fruit and high alcohol. I knew in that moment that we would need to find a variety that would naturally perform on the site – a variety that needs more heat than Pinot Noir but could still thrive in the cooler, alpine environment of Central Otago.

Enter Cabernet Franc. An ancient grape variety with its origins in the Basque Pyrenees, Cabernet Franc is a parent of Cabernet Sauvignon, Sauvignon Blanc and Merlot. Its flavour spectrum encompasses all of these, with rich blueberry and cassis, ripe raspberry, and brambly, leafy and peppery notes.

Made in a number of the world’s great wine regions, it is often made in two styles. The Bordelais use Cabernet Franc as a blending partner for Cabernet Sauvignon and Merlot, to add sweet fruit and soft supple tannins to more powerful and rustic components. A riper wine, made for longer aging in new oak, with firm and unapproachable tannins for several years.

Loire vignerons take a contrasting approach, vinifying Cabernet Franc as a single variety wine made for early consumption. Often served chilled, these wines celebrate the fruit and the joyful, bright tannins unobscured by new oak influence. It was this approach that appealed – and so the plunge was taken, 4,000 vines were purchased, and the next winter we planted the world’s most southerly Cabernet Franc vineyard.

I set about tasting wines from all schools of thought and all different regions, from the Okanagan Valley in Canada, the Loire and Bordeaux in France. I tried Cabernet Franc from New York’s finger Lakes region, and from Hawke’s Bay, Waiheke Island and North Canterbury. The wines I loved most were from the Loire school of thought. Bright plentiful fruit, with racy acidity to balance it. Crunchy, fresh tannins that came from the grapes themselves, not from the oak barrels that they had soaked in. This was the Cabernet Franc I wanted to make – pure, joyful and unadulterated.

And so, when it came to making the wine itself, that was the approach taken. The grapes were completely de-stemmed, to remove any influence of stem tannin and green characters, with a carbonic period and short hot ferment. Minimal extraction and neutral oak were used to ensure it was the fruit that shone, and not the wood.

It was after the wine had finished malolactic fermentation (MLF) that the conversation about adding sulphur started. Typically, red wines are sulphured post MLF to protect them from oxidation, from browning and from spoilage. Increasingly winemakers have been experimenting with low and no-sulphur wines, and typically they are more fruit forward, supple and with softer tannins. Given that this is the style I was aiming for, a trial was in order.

Two samples were taken into sample jars and sealed tight – one with sulphur and one without. Three weeks later the wine was tasted, and it was like night and day. The sulphured portion showed green and herbal notes, hard angular tannins and lighter red fruits. The unadulterated portion showed rich dark blueberry and cassis, tobacco leaf and bright crunchy tannin. The jury was out – this wine would be au naturel.

The result? An alternative wine made in an alternative way. A journey of sorts, that has challenged so many assumptions about what can be done and how. The cynic has had his say, but the bon vivant has won – and the thrill, the tingle and the excitement are all that remain.

Point of View: Sustainability trends - challenges and opportunities in 2022 and beyond

The New Zealand wine industry has long had a reputation for sustainability and being focussed on protecting the people and places that make our famous wines.