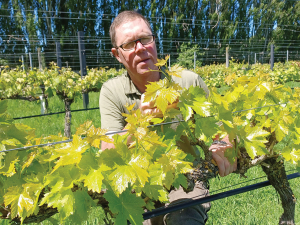 Writing a practical guide on non-chemical weed management had an unexpected result for Dr Charles Merfield, as he delved into the interconnected nature of the vines, groun cover and soils, and the damage done to all three by cultivating.

"During writing, it became clear that undervine weed management could not be sensibly separated from the management of the rest of the vineyard floor," he wrote in the resulting document, Vineyard Floor Management: A Sustainability Nexus with a Focus on Undervine Weeding.

Charles, who is head of the Biological Husbandry Unit's (BHU) Future Farming Centre, still focussed on non-chemical weed management tools in that document, including the thermal weeding he has a particular interest in. But he also delved into the potential of living mulches - growing plants - to help suppress problematic weeds, while providing important ecological services in the vineyard, from nitrogen supply and management via legumes to improving soil health and sequestering atmospheric carbon, and from increasing biodiversity to nurturing bio-controls for vineyard pests and diseases. "All of these have an impact on the multiple, massive global challenges that humanity faces," he says, talking of mitigating climate change, biodiversity loss and excess phosphorus and nitrogen in waterways. "I am constantly thinking about the global environmental challenges we have."

Instead of getting rid of weeds, vineyards should be putting in more plants and greater diversity, Charles says, talking of an "agroecological approach" that looks at the entire system, considering the roles required from each species - whether that's nitrogen fixing or attracting a certain beneficial insect - as well the "externalities" at play, including undesirable outcomes that need to be minimised. Charles says there is "fascinating" information coming out of the "ecological science space" that shows that primary producers choosing plants over herbicide are getting better financial results. That can be hard data for conventional farmers to swallow, he says. In the same way, many grape growers "blinkered" by their understanding of how a vineyard should look, with tidy herbicide strips, struggle to see how increased value can be gained by letting a strategic crop, grow in that undervine area.

The Nexus report notes that the advent of the "herbicide era" around the 1950s "and the dramatic simplification and ease of weed control that they permitted", resulted in a swift shift in the perception of weeds. "Quite simply, plants that had previously been of no concern, were redefined as weeds simply because it was now possible to easily kill them," he says. "Agriculture and society are now starting another paradigm shift in attitude to weeds. The concept that any given plant species is, and will always be a weed, is evolving," he adds, noting that plants can be a weed in one situation but a valuable resource in another. As an example, the Bermuda buttercup (Oxalis pes-caprae) is a problem on Australian farms because it is toxic to stock and out-competes pasture, "while in vineyards, it can make for an excellent undervine living mulch as it smothers out other plants". Because it is active in winter and becomes dormant in spring, the buttercup does not compete with vines during their active growth period. A key part of the "new weed paradigm" is that non-crop plants don't necessarily have to be removed, and those that do cause damage may only need to be managed, rather than exterminated.

Charles, who has been involved in organic production for three decades, says his latest work - including a citrus project in the Lighter Touch Programme - enhancing agroecosystems for arthropod biological control in citrus - is about a complete system redesign. "We kind of need to jump over organics and even jump over regenerative agriculture and say 'okay what is a scientifically informed ecological solution to all of this?'"

For more information go to nzwine.com/members/research/vineyard-resources/soil-water/

Wētā Work: Burrowing into the behaviour of ground wētā

Luring wētā away from the "buffet" of budburst is a potential outcome of research into the native insect munching Awatere Valley vines.

Xylella fastidiosa is in the ‘highest threat’ category on New Zealand Winegrowers’ Most Unwanted list, along with the glassy winged sharpshooter that acts as a vector.