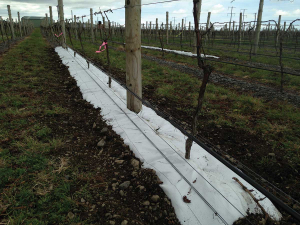 Black and white weedmat installed to the undervine during dormancy, August 2015.

A recent study supports the use of weedmat for undervine weed suppression in stony soils.

Production of wines with equivalent yield and quality to those produced with the use of herbicide weed control can be obtained with weedmat. This is the main finding from a field experiment completed on Malbec grapevines in the Gimblett gravels subregion in Hawke’s Bay, which will be published in the May 2021 issue of the Journal of Food Chemistry, but is currently available online.

The use of herbicide in the undervine area is the common practice in New Zealand vineyards. However, weed resistance and the increased international pressure to reduce glyphosate use has increased the interest in finding suitable alternatives. At present, the main alternatives to herbicide are undervine cultivation or mowing. However, these treatments are more costly and are proven to reduce vine vigour/yield and thus change the quality of the wine produced. Weedmat, to suppress weed growth, is used to great success in many other horticultural industries. Consequently, the aim of this study was to examine the effect of two weedmat colours – white and black - on vine growth and the volatile composition and the sensory profiles of Malbec wines.

The three-year trial was located on a very stony soil in the Gimblett gravels in Hawke’s Bay. Black or white weedmat was applied to the undervine during dormancy of 2015 (Figure 1), with wines of each treatment being made from the 2017 and 2018 vintages. Both white and black weedmat had the desired affect, with no undervine weeds being observed throughout the three seasons of data collection. Furthermore, apart from an increased awareness during inter-row operations, no management changes were required and no damage to the weedmat was ever observed. Weedmat was found to not impact the grape yield, bunch number, or bunch weight compared to the conventional undervine herbicide treatment in any of the three seasons.

The wine sensory analysis showed no statistical differences between the aromatic or tactile attributes. Plots of the average responses (Figure 2) show that in 2017 there is a trend of the black weedmat having altered levels compared to the control and white weedmat, whose response were more similar. In the 2018 vintage, this trend of altered response to attributes is not detected in the descriptive sensory analysis results. While the sensory panel was not able to distinguish differences in the perceived attributes within a vintage, differences in these attributes between vintages highlight the inter-vintage variability and the lack of impact by treatment.

The sensory results are further supported by the analysis of 45 aromatic chemicals found in wine. In the 2017 vintage there are 35 statistical differences between the treatment wines, however, there are only three statistical differences in the aromatic chemical profiles of the 2018 treatment wines. Additionally, the concentrations of the statistically different compounds in the 2018 vintage were all below their perception thresholds, therefore furthering support for the lack of impact.

This suggests that undervine cultivation is proven to reduce vine yields (see main story), a possible negative to growers.

Furthermore, numerous research studies report the negative impact that cultivation has on the organic matters and health of the soil microbiology.

Thus, a new weedmat trial has been established this current season, in the Nelson Marlborough Institute of Technology (NMIT) vineyard in Blenheim, to evaluate weedmat in these high vigour soils.

The use of mussel shells as a natural form of mulch will also be investigated. These two treatments will be compared against undervine cultivation.

This project has been funded by an NMIT Research Trust grant, with in-kind collaboration with Bragato Research Institute and technical support from Plant & Food Research.