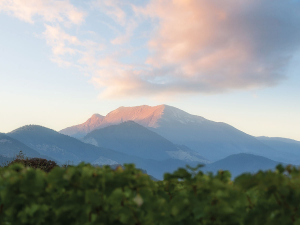 It is also a time when winter can still give us a reminder that we are not in summer yet and the climatic contrast from day to day or even hour by hour can be very stark. A warm two or three days with temperatures climbing into the 20s can easily be followed by a southerly blast that rivals the coldest winter outbreaks, which in turn is followed by frosty mornings until the next warm northwesterly airstream arrives.

The sun reached the spring equinox on 20 September and now continues its march south until late December. By contrast, sea surface temperatures reach their coldest point in early September and begin the slow warming that will peak in March. Statistics will also show us that over history, the coldest southerly of the year has happened in September or even October. On a few rare occasions, snow and a taste of winter can follow us right into November.

Climate patterns such as the Southern Oscillation, Madden- Julian Oscillation (MJO) and Southern Annular Mode all have an effect on the frequency or probability of certain types of weather, and this spring we are still talking about La Niña developing and being the main driver of our climate through summer in 2022. It is likely that the effects of a developing La Niña are likely to be less noticeable through October, but we may see more signs as we move through November. The commentary from climate scientists is that this la Niña may be weak to moderate once again.

The northwest gales that have pummelled several regions in August and September should ease and an increase in a milder northerly flow is expected later in October and through November. High pressure is expected to become more dominant in November and help to keep day time temperatures above average across the country. At the same time there is a chance that rainfall may end up a little below average.

Outlook for October and November

Similar to Gisborne and Hawke’s Bay. A drop in wind speed is on the cards if La Niña strengthens. Strong northwest gales can feature at any time but the chances are reduced from mid-October onwards. Mean temperatures are near or above average and rainfall totals are likely to be close to average.

Temperatures follow the national trend of running above average. Rainfall totals are expected to be near or a little below average.

Mean temperatures continue to run above average. The chance of frost decreases sharply if la Niña conditions develop by late October. Rainfall totals are likely to remain near or a little below average across the region. Strong northwest winds may return at times, but lighter northeasterlies are expected as we move into November.

A warming climate doesn’t necessarily mean fewer frosts in spring. With early growth in August, the risk of frost is still high due in part to the longer nights and relatively long period of cooling. An increase in large, slow moving high pressure systems can also create a number of cool, clear nights with conditions that are conducive for the development of frost. Not every spring will commence as early as this year, but these are just some of the things we need to factor in to a changing climate if the past 15 years is anything to go by.