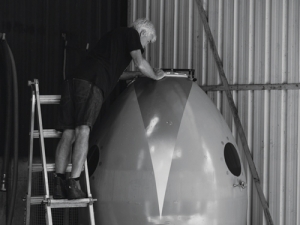 Tony Bish gets a closer look at the inside of the fermenting egg.

Wine fermenters come in all shapes and sizes. From stainless steel giants, to French or American oak barrels and German Fuders.

But now a New Zealand partnership has released the very first concrete egg fermenter in the southern hemisphere.

Well-known Hawke’s Bay winemaker Tony Bish was well aware of the “egg’s” reputation, having read a number of articles about them. But seeing them en masse in Argentina 18 months ago, got him thinking seriously about doing something similar here at home.

“A lot of the more innovative and interesting places we visited in Argentina had these concrete eggs. The people we spoke to were enthralled with the wines coming out of them. They explained how they worked and why and that piqued my interest.”

Besides Argentina, the only other two countries producing concrete eggs are France and America, but the cost of importing them is prohibitive. That got Bish thinking – could Kiwi ingenuity be put to good use to create a similar product here in New Zealand.

Enter Josh Winters, a former vineyard hand from The Crossings. He had recently taken over his father’s business, creating concrete water and septic tanks.

“We had a concrete tank out at Crossroads, so I knew a little about it, and when Tony came to us with the idea, we leapt into it. But it has definitely been a challenge,” Winters says.

For those who don’t know what I am talking about – here is the rundown on concrete fermenting eggs. They are shaped, unsurprisingly, like an egg, wider at the base, tapering off at the top. Made of concrete, means the fermenter provides oxygenation of the wine, similar to the way an oak barrel does, without any oak characters being imparted. But it is the shape that creates the most interest, given it allows for movement of the wine over lees, without any mechanical or manual involvement.

“There are two effects going on,” Bish explains. “There is the undeniable force of the earth’s rotation at play. Think about water going down a plughole.  But also in a convection kind of sense, there is always a temperature gradient from the top of the tank to the bottom, which occurs naturally. And when that happens, because the egg has no straight sides and due to the tapering at the top, you get the convection current being compressed. As it can’t go anywhere, it comes back down. So you are getting motion forces inside the egg. The vertical convection current compressed and returning to the bottom and the rotational aspect of the egg.”
What this does to the wine, is provide a gentle passive motion of solids, which Bish says “causes integration and textural building”.

Oxidisation wise, because the cement has micro pores, oxygen is trapped inside the egg when it’s empty. Then once filled, the oxygen is released slowly.

“They do say that the eggs impart a flavour of minerality,” says Bish, “which is probably something that comes from the concrete. But minerality is a very desirable thing in the modern world. It is the holy grail of wine at the moment.”

The desire to create that within the wines has seen a massive resurgence towards concrete tanks throughout Europe, as well as the taking off of egg fermenters throughout the northern hemisphere. For Bish himself, he says the egg relies on less external manipulation.

So with the obvious and well-recorded qualities of concrete eggs known, how does one go about creating one.

For Winters, that was the challenge. First of all he had to come up with a design, given eggs come in all shapes and sizes. (Think duck, versus chicken, versus sparrow Bish says.) There was a lot of designing prior to a mold being created. The next challenge was exactly what type of cement to use. Given normal cement has lime, that was out of the question. But with some help from a concrete specialist at the Callaghan Institute, an answer was found. Winters is now importing cement that is inert and acid resistant.

“It makes a very dense concrete as well. The sand and aggregate size is very very small, so we can really compact it into the mold.”

Talking of molds, that was his next big challenge and one that created a lot of sleepless nights.

“Fitting it into a fiberglass mold meant I had to get very inventive. But having access to a brains trust of people around here has been really good.”

The end product is a 1600 litre fermenter, weighing in at two tonnes. The very first one off the block is now in use at Two Rivers Wines in Marlborough, (see box) with orders coming in from a number of other interested parties.

Bish himself has an egg filled with Chardonnay which he says will be a New Zealand first.

“My ‘egg made’ Chardonnay will be released under my own label, Tony Bish Wines. The fruit is hand picked Mendoza Chardonnay from the Te Awanga sub-region of Hawke’s Bay.”

Being the first to produce concrete eggs in Australasia, and only the forth company in the world to do so, both Bish and Winters believe the market is their oyster, not only in New Zealand.

“The natural wine market in Australia is huge at the moment, about 10 years ahead of New Zealand,” says Bish. “I think these guys are going to be so excited to know that they can import these eggs from New Zealand, at a far cheaper price than if they had to import from France or California.”

The eggs are being built by Winters’ company NZ Tanks, and sold via Bish’s company KTB Brokerage. One of the eggs will be on display at the Romeo Bragato conference in August.

Two Rivers Wines have been keen to get an egg fermenter for some time, given assistant winemaker Ashley Holland has had experience of them, when working in California. However, like so many other wineries, the cost of freighting one from America or France made the idea financially unviable. So when Holland and winemaker and owner Dave Clouston heard about the New Zealand development, they were quick off the mark. Their egg arrived just in time for this year’s vintage, and is being used solely for their top of line Sauvignon Blanc, Altitude.

Clouston describes the viticulture behind this wine as being as diametrically opposed to conventional Sauvignon Blanc as it can be.

“It is severely crop thinned, we do a full leaf pluck to gain fruit exposure, as we are trying to burn off the pyrazines. We use a lot less irrigation and it has a lot longer hanging time so we get a riper profile.”

The resulting fruit will end up being accentuated within the concrete egg, Holland says, which will provide the ensuing wine with something special.

“Before we were aging the wine in neutral barrels, but it is very hard to keep them in good condition and not pick up a cheesy oak barrel character. I love how the flavours change over a period with small oxygenation coming in through the staves (of the barrels) but what I disliked was the sappiness that 10 months in you start to pick up.

“My experience of working with concrete, is it makes the most complete wine, the most rounded out wine without notes of oak.”

Clouston agrees saying that it is like looking back to the past, to create a new future.

“As a new world we moved to preserve fruit by using stainless steel. Now with the concrete egg we are going back to adding more texture. This wine will have a more natural feel than what we have been used to. I can’t wait to see what it looks like by February of next year.”