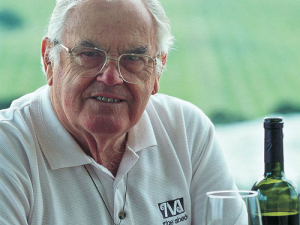 Terry Dunleavy poses a question for international drinks empire, Pernod Ricard: why are you using Australian grapes in Montana wine?

I have a serious question for whoever it is in the management of the international drinks empire, Pernod Ricard (P-R), in either Melbourne or Paris whence it is reputed that all decisions regarding the marketing of the group’s products in New Zealand emanate:

How would you react if I was to suggest that in North America at least, if not elsewhere in the spirit drinking world, there’s a vacant niche in the market for rye whiskies which your group could fill by having your Canadian subsidiary Corbys buy a distillery in Romania, where rye (and indeed also corn, another ingredient of this whisky style) have been widely cultivated for centuries, to produce a lower-priced version of this popular Canadian whisky style under the brand name: SEAGRAM?

Why Seagram? Well, P-R can lay claim to ownership of this once iconic brand of Canadian whisky, having bought most of the spirit brands of Seagram in 2001.

My guess is that such a suggestion would be instantly, and probably vehemently rejected, on the grounds of  probable consumer resistance to the prostitution of such a once-proud name in the international rye whisky and other spirits fields.

But that’s what P-R has just done in the wine field through its proposed launch of a lower-priced range of table wines made in Australia from Australian grapes under the brand name MONTANA.

I know that P-R is primarily a spirits-driven group, wine is something of a sideline.

P-R’s acquisition of the largest New Zealand wine company that was originally Montana Wines Ltd occurred in 2005 when it purchased Allied Domecq PLC, which in 2001 had out-bid Lion Nathan for the right to acquire Montana from its former owner, Corporate Investments Ltd.

By curious coincidence there was a prior link between Montana and Seagram. In 1972, agreement was reached for Seagram to buy 40 percent of Montana shares in return for 50 percent representation on the company’s board, giving the Canadian giant effective control.

The Seagram influence on Montana was huge, bringing world class viticultural and winemaking expertise to drive vineyard expansion and spectacular improvement in varietal wine quality. In a matter of months, Montana consolidated its position as not only the largest wine company in New Zealand, but industry leader in production, marketing and promotion, and the launch into exports.

Seagram initially saw New Zealand as a contributor to its growing international wine portfolio, and supported Frank Yukich into opening up Marlborough.

Marlborough’s international fame throughout the wine world rests on its unique style of Sauvignon Blanc, and for the ensuing 25 years at least its best-known wine was Montana Marlborough Sauvignon Blanc.

When Seagram decided in 1986 to liquidate its Montana shareholding, it gave first option to Peter Masfen, a then current Montana director who had himself taken over the cornerstone shareholding of his late father-in-law Rolf Porter. Through his company, Corporate Investments Ltd (CIL),  Masfen beat Lion Nathan to become major shareholder in Montana and its company chairman, a position he retained until CIL in its turn sold Montana to Allied Domecq in 2001.

Under P-R control, Montana was to change its major wine brand name to Brancott Estate, after the location of one of its keystone Marlborough vineyards.  Although the name Montana was coined by founder Ivan Yukich, it became confused, particularly in America, with the arid and viticulture-averse US state of the same name. Brancott was unique, more acceptable, and grounded on an actual vineyard location. It was a wise choice.

But P-R’s latest venture into wine branding, applying to a lower-price-pointed range of wines sourced from Australia a name that has as much historical and emotional impact on New Zealanders (and many Australians) as the names Pernod and Ricard have on French and other lovers of pastis, is not just grossly unwise, it is a prostitution of the sanctity of a well-known and well-loved brand, that will be forever associated with New Zealand and particularly with Marlborough.

How this prostitution of the Montana brand aligns with its self-proclaimed dedication to premiumisation and ethics. I can recall a telephone conversation with a P-R executive in Melbourne when I was editor of this magazine, and he introduced me to the term “premiumisation” as a core principle of his company.  Thus, as a former Montana executive myself, I was able to understand and support the change of brand name to Brancott Estate for export objectives, while retaining the Montana for local sales. With most Montana varietals sourced from Marlborough, this also retained the historical link with our largest viticultural region which Montana had pioneered.

Can I recommend P-R management refer back to its own group website, where it says:

Our employees are proud to be ambassadors for our brands because they are, quite simply, great products. With a unique and diverse portfolio, Pernod Ricard is known worldwide as a creator of some of the most iconic and exceptional wines and spirits in the market. Our premiumisation strategy and our positioning are key components in building this image.

The political implications of a renewal of criticism of the extent to which ownership of New Zealand assets has fallen into the hands of overseas companies who appear to care little or nothing for protecting the identity and interests of our country. This, so soon after the creation of a governing MMP coalition known to have strong views on overseas ownership, as exemplified by the blunt comment by the new Minister of Agriculture, Hon Damien O’Connor, that the Pernod Ricard decision was “pretty bloody dumb.” Until this inexplicable decision,  P-R has shown itself to be a model of the benefits of overseas ownership in opening channels to export markets, while maintaining the reality of dedication to our industry’s best interests in the local market. Now that hard-won reputation has been shredded.

So, with all the intellectually persuasive strength I can muster, I plead with P-R management – stop it…now! Don’t prostitute the name Montana, which has such high and well-remembered reputation in our wine development history.

Indeed, don’t prostitute your own reputation for premiumisation and integrity. For this new range, find another name, just as was done at Montana during my time when, faced with a similar need to fill a lower price-point, we introduced a range branded Brother Dominic.

— Terry Dunleavy MBE, FWINZ, was a senior executive of Montana Wines Ltd 1971-76,  inaugural CEO of the Wine Institute of New Zealand, 1976-91, and inaugural editor of NZWinegrower magazine in 1997.

We are committed to delivering quality wines at good value for money in the under $10 category and, for the Montana wine range, we feel this is best achieved by sourcing grapes from outside of New Zealand. We have worked hard to minimise the change in wine style and to ensure that the wines continue to deliver the quality our consumers expect.

We have made this change as it is no longer viable to make quality wines below $10 using New Zealand grapes.

This decision to source grapes from outside of New Zealand is not a first for the industry, and many wineries are implementing sourcing solutions to keep our industry sustainable.

This was a decision made locally to ensure we can continue to produce high quality wines, while still supporting the local industry. Pernod Ricard is one of the largest exporters of New Zealand wine and a strong contributor to the industry. It is in no-one’s interest for us to create wine at a financial loss or to produce wine of such low quality that it taints the reputation of Marlborough as a region.

We will continue to produce New Zealand made wines under the Montana Reserve and Montana Winemakers Series ranges.