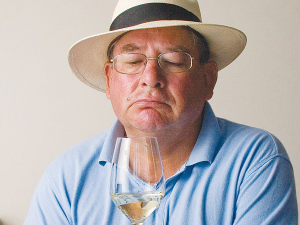 Wine, like art, is an attractive medium for forgers. At the top end a well forged bottle of ancient Bordeaux can return tens of thousands of dollars while at the more commercial end of the market winemakers can gain an edge on their competitors by stretching or adulterating vast numbers of relatively inexpensive bottles.

Imagine two Austrian winegrowers. One is on the sunny southern side of a hill while the other is on the cooler northern side. Wine grown on the well-exposed site is riper, richer and has potentially more alcohol. It commands a better price than the thinner, greener wines from the other side of the hill.

Easily fixed says the man with the cooler vineyard. I’ll thicken it up with diethylene glycol. And he did. It worked. The wine was worth more. Unfortunately, diethylene glycol, an ingredient in antifreeze, is poisonous. Eventually someone died, a scandal was born, and Austrian wine sales tanked. Australian wines sales also suffered because people confused it with Austria.

When you sip a glass of Austrian wine don’t say “Prost”, say “Frost”.

This is my favourite. If a German manager of pop groups edged up to you in a pub and said “Psst, wanna buy a 1787 Chateau Lafite once owned by Thomas Jefferson” you probably wouldn’t show a lot of interest.  But when the recently deceased Hardy Rodenstock submitted the same wine to Christie’s in London it fetched the then equivalent of NZD$300,000 and set a world record, which still stands.

For chapter and verse on this particular scandal I recommend “The Billionaire’s Vinegar” a thoroughly entertaining record of the sort of greed, stupidity and one-upmanship that led to “wine collectors” paying huge sums for wines of dodgy provenance. Most got exactly what they deserved.

In 1990 I asked a producer of Chianti Classico what percentage of white grapes he used in his wine (then required by law to be 10%). “None” he replied brazenly, “but I tell the officials’ 10%. It is better for the wine”. That’s the Italian way.

It was no surprise to learn that winemakers in the exalted region of Montalcino had been blending a grape used to make Lambrusco into wines that were supposed to have been made from Sangiovese. Investigators discovered that one large producer had been blending Merlot into his Brunello di Montalcino for 25 years.

Brunello di Montalcino was banned in the US; a large volume of wine was declassified. No one has yet been punished. The officials are probably driving new Alfa Romeos. Life and wine sales have pretty much returned to normal in Montalcino. Perhaps it was better for the wine?