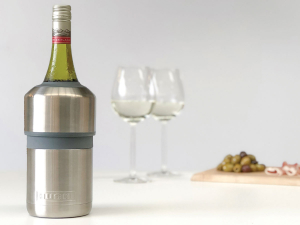 The Huski Wine Cooler at work.

About a year ago I was contacted by Simon Huesser who had attended my wine course while working at Villa Maria. After some overseas travel Simon returned to New Zealand and developed a range of insulated stainless-steel products to keep beer cold and coffee hot. I’ve trialed the Huski Beer Cooler and Huski Short Tumbler (for hot coffee or cold beer) – they all work well.

Simon wanted to develop an insulated wine cooler and had developed a prototype that would fit most, but not all, wine bottles. There was a little fine-tuning to do but I was able to test-drive the prototype and was impressed with its appearance, ease of use and ability to keep a chilled bottle of wine cool for several hours.

Check out the chilling test on the Huski website https://www.huski.co.nz/blogs/news/huski-wine-cooler-preliminary-product-test and you will see that the Huski Wine Cooler maintains a temperature of 6 or 7oC for a couple of hours than rises to around 8 oC after four hours and 10 oC after six hours. That’s an impressive performance.

The brushed stainless-steel version costs $84.99 and for an extra $5 you can buy the cooler in white, black or rose colours.

I use the Huski Wine Cooler when I am visiting friends or going to a BYO restaurant. It attracts a fair bit of interest – most people who have a fiddle with it want one. It’s a good idea to write your name and phone number on the underside in case you return home without it. That has happened to me twice but in both cases I managed to get it back.

The wine cooler won’t accommodate some extra-large bottles that weigh over 1Kg and some particularly bulbous champagne bottles but it seemed to handle more than 90 percent of the bottles from my cellar.

The Huski Wine Cooler was awarded the Best New Product in the People’s Choice Awards at the NZ Gift & Homeware Fair Autumn 2019.

For more details or to purchase this rigorously tested cooler go to www.huski.co.nz