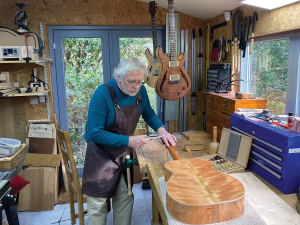 I'm writing this on the verge of coming home after almost two years of 'lockout'. And, of course, that had been our theme: the world had lockdowns while New Zealand had lockout. I had no idea when I got on a plane to the United Kingdom at the end of vintage 2020, it would be two years before I return, but then none of us understood much about all this.

In some was this feels like a postcard from the battlefield - a sort of war missive. But the truth is that everybody is bored with it and would rather get on with life, regardless of it all. Almost everybody I know has had it, a few got properly sick, but none desperately. I dodged the bullet.

Before I left in May 2020, we had already reshaped our sales plan; cut back distribution to markets that were on-trade heavy, build our direct to consumer (DTC), focus on consumer communication - not a barrage, but take a more human tone, talk more about feelings than case prices. By leaving Blair (Walter, Felton Road Winemaker) in New Zealand and myself in the UK, in theory I could be mobile and in the markets while he ran the shop.

In practice there was quickly no safe travel and nobody wanted to see visitors from elsewhere. But we were taken aback by the surge in demand from online retail and DTC. Everybody seemed to be filling their cellars. Was it boredom because they couldn’t go to work? A sort of siege mentality? Who knows, but there was a definite thirst out there. Vintage 2020 sold out in record time. With no proper job to do, I retreated to my workshop. My escape from wine is luthiery: I make guitars.

I planned a series of semi-acoustic guitars based on a sort of terroir. These would be instruments which came from sustainably felled wood, where I knew the tree the wood came from and the history of that tree. A disease felled London plane tree that lived for a century or more in Berkeley Square in London. A Californian sequoia, storm felled 120 years ago, but 2,500 years old. One of the very first cedar of Lebanon trees planted in the UK, struck by lightning after 230 years, growing by a royal palace.

So, my planes and chisels kept me sane. I slowly came to understand that the main symptom of this pandemic has been a loss of future tense. I would watch people all around me make plans, cancel them, make new ones, cancel those. Some seemed to be able to adapt to the idea of living in the present, while many were locked in a desperate need to have a future goal, futile though it might be.

I generally abandoned the idea of anything involving groups of people or travel. I learned to loathe Zoom, though I was forced to employ it. But then an amazing thing happened. In late 2021 things calmed a bit and our French distributor decided to run their portfolio tasting in Paris. I thought of a plan: I could take a ferry from the UK to Santander in Spain with the car. We could have a couple of weeks of electric touring (it’s a Tesla) through northern Spain and western France, staying mainly at selfcatering accommodation; we could be as isolated as we needed to be. As plans evolved, serendipity started to play a part. I received an invitation to stop for lunch in Bordeaux at a Chateau we know, and another invitation to address the wine school at Bordeaux University. Then we could do the tasting in Paris and back home by ferry. A holiday! Of a sort. And it worked beautifully. Everywhere was pretty quiet, except for Zaragoza, where there was the festival of the Virgin, creating a massive party.

It was brilliant to be back in wine country and an honour to be able to talk to the students at the university. But nothing prepared me for Paris. When I walked in that room to see 70 or so fellow wine producers, quite a few of them friends, all laying out their bottles, suddenly the world switched back to normal. It was incredibly moving; I could see the world coming back before my eyes. About 800 people came from around France that day to taste - for most of them the first such event they had done for close on two years. The buzz and excitement was palpable. Everybody could only enter with proof of vaccinations (the French system is very similar to the Kiwi one) and a great time was had.

That evening about 80 of us took over one of my favourite restaurants in Paris (Le Petit Sommelier) for a raucous dinner of amazing wines and cuisine, everybody giddy with excitement at this opportunity to rediscover normality. I looked around and I was back with my wine whānau: a global tribe, united by the joy that good wine, food and company can bring. No other industry can do this. A brother and sisterhood that is global, driven by a joy of what we make, respect for the endless diversity on offer and the extraordinary people who create it. We are truly blessed.

Nigel is owner of Felton Road. See more at longbrookluthiery.com